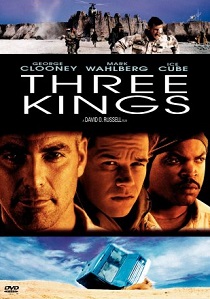 Three American soldiers are disappointed to have seen no action during the Desert Storm operations and are going through the repetitive and boring practice of processing Iraqi prisoners of war. Whilst searching one particular prisoner they come across a secret map, secreted in a nasty place, giving directions to Saddam's hoard of stolen Kuwaiti gold.

Whilst making plans to go and retrieve some spoils of war for themselves a special forces officer, Archie Gates, comes across their plan and, naturally, wants to take something extra for himself home. The group head off into the desert but, as usual, things soon don't run the plan as they soon find themselves torn between taking the gold and helping the local population.

The picture is very similar to the technique used by Steven Spielberg with Saving Private Ryan. Rather than making the film look old, it has been bleached to give it more contrast for the desert scenes and I must admit they are very effective. At the beginning of the film it even warns you that the colour bleaching is intentional. The indoor scenes do not use this technique and are therefore much more rich and colourful.

The sound is good with plentiful use of the surround channels during the numerous action sequences, especially during a helicopter attack and an exploding milk truck delivering thumping LFE's. It has to be said that the region 2 version matches the region 1 version picture for picture and sound for sound, both being absolutely superb with no artifacting or outlining. In fact I'd say that the region 2 version actually betters the region 1 version due to its increased resolution.

The extras are wonderful. As directors see and appreciate the DVD technology at work they will endeavour to bring us more background information about the film and its production. What we have here is informative and interesting along with some marvellously animated menus. Great stuff!

The region 2 disc however suffers slightly in the extras department, but only slightly. Both the Production Notes and the Bios are gone, along with two of the Easter eggs that adorned the region 1 version. Also the DVD-ROM material originally appeared to be a little lacking, the links to CNN's gulf war archives looked like they were not present on the region 2 version until I delved deeper and found the full website hidden in a directory...Odd that it doesn't seem to be accessible from the PC Friendly software.

Like Saving Private Ryan before it, this film has a definite anti-war theme to it. Indeed, the director sees it appropriate to indicate, in a gruesome and graphic manner, the implications of being shot. We also see the terrible consequences of the Gulf war from the burning oil wells, polluted oceans and the betrayal of the Iraqi people by the then president George Bush. He requested that the population should rise up against Saddam only to offer no support to them at all, with the resulting obvious consequences from the Iraqi soldiers. There is certainly a political message in the film.

Putting the messages aside, there is still room for an action packed and, at times, humorous film. However, some of the more colourful references to the enemy soldiers might offend certain ethnic groups, although the director was quite keen to point out at the time that these were tested and deemed not to be offensive.

This is a great action packed film with great direction from David O. Russell and a set of extras worth fighting a war for, well OK, may be not. As for which version to recommend, its got to be the region 2 version, the picture is marginally better than its region 1 counterpart, and although were missing a few extras, they're not too important and should never be the sole reason for buying a disk.