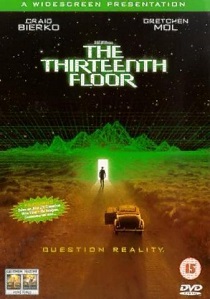 Computer scientist Hannon Fuller has discovered something very important. He's going to tell his discovery to his college Douglas Hall, but fearing for his safety, he leaves a letter in a VR computer simulation of the 30's but that same night he is murdered and Douglas is suspected. When Douglas awakes the following day he discovers a blood stained shirt in his bathroom. Trouble is, he doesn't know where it came from and can't remember what he was doing the night before.

When the murdered victims daughter, the beautiful Jane Fuller, arrives from Paris things start to become even less clear and he ventures into Fuller's virtual reality world in order to discover the truth, which, when unravelled is more shocking than he, or anyone, could ever have imagined.

This is one stylish film however, with an excellent quality picture to go with it. Some of the outside scenes in the region one edition are breathtaking with bright colours pushing your TV and DVD player to its limits, and dark night scenes making your player work just as hard. However, the region two edition appears to be quite grainy with a low bit-rate and suffers from too much contrast. This is especially evident during the scenes set in the 30's.

Paul thought that the sound quality on the region one edition, although good, didn't use the 5.1 channels to good effect, but since the film is heavy on dialogue, this was probably not a surprise. However, the region two edition uses the channels well with plenty of ambient music and effects in the surround channels. There's even plenty of LFE's throughout, but they were a little over used. Another difference of opinion perhaps?

The Before and After SFX section on the disc is worth a mention. It shows the various skylines and landscapes before the computer got to work on them and turned them in to 1930's LA. And they say that the camera never lies!

We really enjoyed this film and it certainly scores a parallel with "The Matrix" and will stand up to repeat watches, especially when the gorgeous Fuller (Mol) is on screen. Whether you like it depends on one thing...Do you like "The Outer Limits" or "The Twilight Zone", if you do, you'll like this film...If not...Well, its not a bad reference disc, and the extras are excellent along with a very pretty menu system on the region one disc.