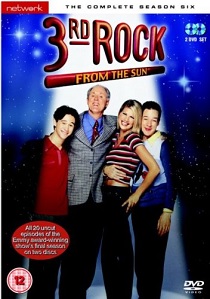 ReviewTV SeriesComedy
Review Article Go back to homepage
The aliens have landed and they are on a mission to monitor human activity and report back to the big giant head. Unfortunately, these aliens are totally unprepared for life on earth and just don't have a clue!
John Lithgow, Kristen Johnson, French Stewart, Joseph Gordon-Levitt, Jane Curtin, Simbi Khali, Wayne Knight, Elmaire Wendel
Television, Comedy
All
7 Hours (Approx)
Buy DVD
Story

A group of aliens have been sent to Earth on a mission in order to learn everything about its customs, population and life in general. However, so that they can mingle with the general population without detection they have taken on human form. Now they are all human they've taken on the daily mental and physical requirements that go with the job. When one of the crew is a teenager and one a woman things are not going to be easy.

Dick Solomon is the High Commander of mission. Naturally, with these aliens having a so called higher intelligence than us humans, Dick has got himself a job teaching Physics at the local University. Although his body is the oldest of the group his sees himself as the handsome one.

Sally Solomon is the Security Officer, and second-in-command. This alien has been placed in the body of a beautiful blonde woman. Her resultant condition has lowered her ranking in the eyes of the human race around her, and she doesn't like it one bit. However, her breasts may just come in handy in coercing the male part of the population.

Harry Solomon appears to be runt of the mission crew. No one is really sure how he became part of the mission on the first place. Mind you, he is the main communications portal to the home planet and their illustrious leader the "big giant head". Harry is also the sensitive type and completely gullible. He'll fit in just fine.

Tommy Solomon is the oldest member of the mission but he's actually taken on the human form of a teenager. He doesn't like his body one bit as he's forced to go to school and do as he's told by the people around him. Naturally, as a testosterone filled teenager his body is causing him the most agro and his hormones may explode at any minute.

The picture is quite excellent for a television show and could almost be classed as broadcast quality. However, it is a typical NTSC to PAL conversion that results in a picture that has a little too much contrast and lack of colour definition. But it is still galaxies better than many of the more expensive television series presently available on DVD, and it's certainly far superior to anything that video can offer. Although the bit rate remains fairly average throughout the entire twenty episodes there are certainly no signs of artifacting or any graininess. The only disappointment is the lack of widescreen but for a television series this can be forgiven, even if the likes of Buffy the Vampire Slayer can offer much better visuals (in more sense than one!).

For a television series, 3rd rock is hardly going to receiving any awards for the sound quality department. There's certainly no need for fancy and expensive surround effects, but the sound quality offered here is more than adequate with some clear and precise audio.

Distributors Network have managed to come up with quite an imaginative menu system. It is scored with the series theme music and whenever a menu option or episode is selected you get a quick trip around the galaxy in a manner only 3rd Rock can manage. The only minor quibble is the poor quality introduction from a member of the cast at the start of each episode.

One bonus is in the episode selection. You can either select and view a favourite episode or watch an entire ten episodes on each disc in one sitting. However, if you opt for this option you'll miss out on the quips from the various cast members.

It's a pity that the series has to come to an end as each episode is as fresh as another with this season being particularly funny. The comedy timing and one liners, especially from John Lithgow, are just brilliant. In fact the whole cast are funny with some excellent scripts, so much so that the show has earned over 30 Emmy nominations. The highlight of the season must of being the Solomon's trip to a different dimension in New York and Sally finding that she had a particular sex column in a newspaper.

It is hard to believe that John Lithgow was the evil baddy in Cliffhanger. When I first learnt that John Lithgow was to be in 3rd Rock I had a hard time trying accepting that he'd fit into a comedy role. Fortunately, I was very wrong! There also another bonus with this disc, it is region free. Let's just hope that Network manage to get the rights to the other five series and reproduce the excellent work they've done here.