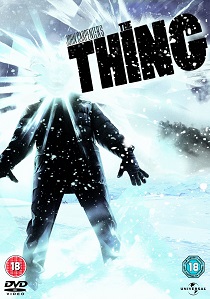 ReviewHorror
Review Article Go back to homepage
Its winter 1982 and twelve men living in a remote Antarctic research station discover an alien buried in the snow. After tests it is discovered that the alien has been in buried for over 100,000 years and when it is defrosted deadly havoc ensues. The alien can change its shape at will and becomes one of the scientists...But which one?
Kurt Russell, Wilford Brimley, T.K. Carter, David Clennon, Keith David, Richard Dysart, Charles Hallahan, Peter Maloney, Richard Masur, Donald Moffat, Joel Polis, Thomas Waites
Horror
2
1 Hour 44 Minutes
Thank you for supporting DVD365.net when you order using the link(s) below.
Buy DVD
Story

Before I bought this DVD I knew little of this film, other than a recommendation from Simon and an episode of "The X-Files" loosely based on it. I had been attracted to it by my love of science fiction films and its similarities to "Alien", I was not disappointed. Its a great film, which generates almost as much suspense as the aforementioned chestburster. The remote setting is used to great effect with the initial scenes of a dog running across the snow, being chased by a helicopter being particularly effective.

The picture is superb, especially considering the film stock is 18 years old...Take note Fox and consider your "Die Hard" picture (the stock of this is only 10 years old and comes across as washed out). It seems that snow scenes bring out the best of DVD's picture offerings...This film has lots of snow. Sound is also excellent, the surround channels are used to great effect when needed and are not over used. The aforementioned scene of the dog running across the snow is a good example, with the helicopter swooping around.

Again, the distributors have managed to slap a star shaped boxout on the cover telling potential buyers about the wonderful extras. DVD365 feels very strongly about this subject...When will they learn that the film, sound and picture are just as important as the extras. So, a great film, great picture, great sound, great extras, great value, annoying disfigurement of the cover....Buy buy buy!