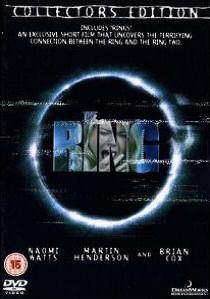 ReviewHorrorDramaThriller
Review Article Go back to homepage
A newspaper reporter looks into the urban myth of the video tape which leads to the death of the viewer seven days after viewing. And what better way to check out the myth by watching the video. Ooops.
Naomi Watts, Martin Henderson, David Dorfman, Brian Cox, Jane Alexander, Lindsay Frost, Amber Tamblyn, Rachael Bella, Daveigh Chase, Shannon Cochran
Drama, Horror, Suspense/Thriller
2
1 Hour 50 Minutes
Thank you for supporting DVD365.net when you order using the link(s) below.
Buy DVD
Story

When four teenagers meet with a unexplained death exactly seven days after watching a mysterious video tape, an old urban legend resurfaces about a video which is filled with nightmarish images that leads to a phone call foretelling the viewer's death in exactly seven days. With her niece being one of the victims, investigative reporter Rachel Keller decides to track down the video and dispel the myth. At first, all the information coming at her about the video tape seems ridiculously implausible and nothing more than teenage gossip. But when she visits the log cabin where the four teenager supposedly watched the tape, she finds an unlabelled tape and decides to place it the video.

Rachel is greeted by a series of dark and mysterious images of ladders, horses, lighthouses, mirrors, a girl and landscapes all implying an answer to the unknown. And then, the phone rings and the caller announces that she has seven days. As Rachel gets more and more disturbed by the strange coincidences occurring around her she decides to get her ex-husband, Aidan, to watch the tape and relieve her fears. But when Aidan gets the same mysterious phone call and starts to witnesses the same strange things, the pair start to believe that legend is true.

With the clock to their apparent grisly end ticking by, Rachel and Aidan have just seven days to uncover what the tape is all about. As their investigations continue Rachel uncovers a tragedy stricken horse ranch and a strange little girl called Samara. However, as if things weren't already scary enough for the pair, Rachel's young son Noah has just found the video tape in her apartment and sat down for a innocent evening viewing. One thing is for sure, it wasn't from his Tom and Jerry cartoon collection.

The images match the ghostly nature of the film with a dark and dimly lit picture throughout. The entire film is also bathed in a strange and almost bleached blue hue which gives nearly every scene a dark and bleak monolithic outlook to the world. It's certainly impressive, with some sharp and colourful day time images, whilst the darker interior and nighttime scenes are ominous enough the heighten the tension. Fortunately, the picture manages well enough and there no signs of artifacting or outlining.

However, there are a few occasions where the picture has a distinct graininess about it. Whilst it's not too distracting, and it may well be deliberate move from the director, given that this is the all encompassing collector's edition a better quality transfer should have been more forthcoming. Fortunately, the picture manages to retain some of its dignity by presenting a print which is free from artifacting or outlining.

If a horror film is to involve and keep the attention of the audience then it really needs a soundtrack to match the creepy on-screen goings on. Fortunately, the Dolby Digital 448 Kbps soundtrack manages to produce the goods with the minimum amount of effort for the maximum amount of neck hair raising gain.

Being a heavily dialogue based film the majority of the activity is placed firmly in the centre channel with very little else moving to either the surround or front stereo channels; so much so you'll keep checking your surround setup. But as the tension mounts, or there's a sudden flashback or disturbing image to get across, the surround channels will suddenly announce their presence and make you jump. Put this together with the occasional ambient weather effect and the creepy musical score, the surround channels really do help heighten the on screen tension.

Even though the menu design and layout is identical to the original release, the menu is animated and scored in both a pleasant and eerie way. Still, if there was ever a menu system to prepare you for a horror film then this would be it. With quick cut scenes and images from the mysterious video tape, and equally spooky menu transition effects, you'll be reaching for a cushion to hide behind before the film has even started!

Although the original release contained a French Dolby Digital soundtrack this has been dropped in favour of some additional extras for the collectors edition. The main extra on this release is the fifteen minute sequel setup "Rings" The Ring Bridge Story. I won't spoil the plot for you, but let's just say that the urban legend continues and more people have viewed the tape and suffered the consequences. This edition also contains the fifteen minute Don't Watch This featurette which is made up of deleted and existing scenes from the film. This collection of scenes, including eerie clips from the video in question, is certainly a novel way of presenting the deleted scenes and, together with a Dolby Digital soundtrack, it makes the viewing all the more interesting.

A welcome addition is the seven minute The Making of "The Ring" featurette. Although a little on the short side, it contains the usual set of interviews with stars Naomi Watts, Martin Henderson, Brian Cox, David Dorfman, director Gore Verbinski and producer Walter Parkes. Once the back slapping is out of the way (and there's plenty of it) the group do at least manage to explain some of the story. However, it does lack detail and although there is the occasional bit of behind the scenes footage, any form of production or background information is none existent. Also included is The Tape which I can only assume is the tape that the sequel is based around. Running at just over a minute it is the usual collection of strange and eerie images which wouldn't look out of place in a project from a film student. Things are rounded off with the usual collection of theatrical trailers, this time for The Ring and its sequel The Ring 2.

Whilst these extras are a definite improvement over the first release we are still missing an audio commentary or even any form of reference to the film this is based on - the Japanese film Ringu. And what better way to make the package all the more interesting by interviewing its creator - Kôji Suzuki?

At the time of writing the sequel, which is rather imaginatively titled The Ring 2, is due for its theatrical release. And what better why to remind people of the first film by releasing a collectors edition and making a few extra quid in the process. Universal and Dreamworks seem to be the most active of most, with collectors editions of Meet the Parents, The Bourne Identity and Pitch Black to name but a few, but should fans and owners of the original release throw theirs in the bin and purchase this edition? Well, considering the fact that the original release was hardly blessed with a multitude of extras, this release becomes all the more tempting to both new and existing owners alike.

However, other than the new Making Of featurette, there is very little applicable to The Ring and I'm sure the extras included here will be no doubt duplicated on the sequel DVD. Still, the fifteen minute featurette "Rings" The Ring Bridge Story does add a clever, and ultimately intriguing, element to the sequel and is tempting enough to drag you to the cinema. I just hope that this is all new material and isn't simply the first fifteen minutes of the of the new film.

Whilst the casual film viewer may well indeed be scared by this film, fans of the horror genre in general will probably find very little to make them jump. The gore-o-meter has definitely been toned down and The Ring leaves it up to the imagination for many of its more disturbing moments. And depending on just how sick your imagination is, this may well indeed be scary or just plain kitten cute. Trouble is, after watching Scary Movie 3 and its hilarious plot which revolves around The Ring, you may well find it too hard to take this film seriously. Still, you can't be too careful, so make sure that the phone is off the hook before watching...