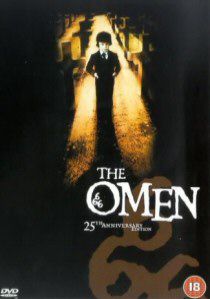 ReviewHorror
Review Article Go back to homepage
As foretold in the book of revelations, Armageddon will begin with the birth of son of Satan in human form. And so he was born at 6am on the 6th day of the 6th month...
Gregory Peck, Lee Remick, David Warner, Billie Whitelaw, Harvey Stephens, Patrick Troughton, Martin Benson, Roy Boyd
Horror
2
1 Hour 46 Minutes
Buy DVD
Story

When Katherine Thorn's newly born son dies she is unaware that her husband, and high ranking American diplomat, Robert and doctors have switched the baby for a newly abandoned baby. The Thorn family continue life as normal and raise the child as any loving parents would. However, as the child grows older it becomes apparent that this is no ordinary child.

When a babbling priest challenges Robert about the coming of Armageddon and that his son is the anti-Christ he naturally disregards the priest as a screwball. But things around him are starting to change and when a number of his staff die in mysterious circumstances, with bizarre images caught on a reporters camera, he slowly becomes aware of the evil he has adopted and the significance of the number 666.

Although the film is starting to show its age the picture is reasonable enough with a fair amount of colour and detail. There is the occasional dusk speck and picture imperfection but it still manages to put in a good performance with an average bit-rate without any pixelisation or outlining.

Again, for a film that is pushing 25 years old you can't really expect much from the sound department. Although it is only a stereo soundtrack the dialogue is crisp enough and the haunting crescendos of music make the soundtrack all that more dramatic.

The menu is nicely animated and scored and the discs contains a good set of extras. There's the usual interviews and trailer and a "making of" documentary that runs for over 40 minutes. It even divulges how the famous falling from the landing scene was done as well as covering numerous other interesting sections of the film. This documentary is worthy of the price of the disc alone.

Although this film has scared the pants off me for many years, proving that they don't make decent horror films anymore, it seems to have lost it edge as I became rather bored watching it. However, it is still the best film in the series by far as the others just cashed in on the success of the first. Perhaps the shine was taken off this film because I've seen it so many times, and the fact the some of the acting was rather iffy and the special effects laughable.

Mind you, there's a young lad who lives near me and he's the spitting image of Damien, and he keeps giving me the evil eye .... (cue music)