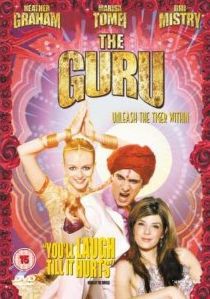 Ramu Gupta lives in India and ever since he saw "Grease" at the local cinema he has longed to dance like John Travolta and make it big in Hollywood. Unfortunately, the best he can manage is teaching the locals how to do the hideous dance that is known as the Macarena. But his unfulfilling job is not going to last much longer as he is finally setting off to America in order to meet up with his cousin and accomplish the American dream.

His cousin lives in a New York penthouse flat and drives a red open top Mercedes. If he can make a go of it in America then Ramu is determined to give a shot. Unfortunately, upon his arrival he quickly learns that his cousin has been a little economical with the truth. His car is a taxi, and it's not even his, and he lives in a run down apartment with a number of other people whose legal status is certainly a bit of a grey area.

Unfortunately Ruma is unable to perform on demand. Taking pity on him, his co-star Sharonna decides to help him out and offers her wisdom on all things sexual - in turn for Ruma buying her a massive wedding cake for her fast approaching wedding. When Ruma is forced to fill in for a drunken guru at a New York socialite party he quickly discovers that his newly acquired sexual wisdom, and Macarena, is in big demand.

The picture is bright and richly colourful with an impressive level of detail and high bit-rate throughout. This film must also be one of the most colourful, and challenging to encode, I've ever seen. At the beginning and end of the film Indian dancers appear wearing a myriad of red costumes and as they dart around the screen the picture holds up perfectly without any signs of outlining or pixelisation.

Along with the impressive picture reproduction there's a welcome choice of either a Dolby Digital or DTS soundtracks. The dialogue is crisp and clear in the centre and the stereo steerage in the front channels is good whilst the surround channels are a little under used. But it is the musical score that really shines with some real foot tapping tracks that have recently graced the British charts. Whilst there is nothing of any note to challenge either sound format, the enhanced ambience and presence of the DTS soundtrack ensures that it wins the sound stakes.

The majority of the recent releases from Universal have tended to come with extensive and interesting extras. Unfortunately, this disc seems to have missed the boat with a rather lacking set. You can always tell when things are looking a little rough when the disc is padded with a number of theatrical trailers for others films, although the trailer for Johnny English, staring Rowan Atkinson, does get funnier each time I see it.

Anyway, back to the extras. The selection of deleted scenes are reasonable enough and I could see why some of them were removed. However, I definitely felt that the extended opening scene was better than the final version, if only for the lovely looking lady that causes Rami to crash his motorcycle. However, the inclusion of the Sugababes extremely catchy Round Round music video is a big plus and the audio commentaries are reasonable, even if they do become a little tiresome and uninteresting.

Whilst the film is undoubtedly funny in places, with the line Name a famous Indian in America and the reply 'That bloke in the Simpsons' being one of my favourites, there is something that I can't quite put my finger that stops it being the cracking film it should really be. There's certainly no question that the Hollywood/Bollywood cross over works well, and it is bound to have positive effects for Bollywood movies both in America and Europe.

But perhaps the real problem with this film is that it tries just too hard to cater for that fickle taste that is American humor, and in doing so it has neglected the comedy elements that really tickle the British funny bone. That's certainly not to say this film is a stinker, it does have its moments, but if you were expecting something along the lines of the extremely funny East is East, you'll be sadly disappointed.