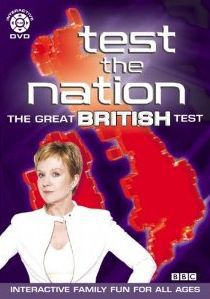 ReviewTV SeriesFamily
Review Article Go back to homepage
The populate television series fronted by Anne Robinson is finally released as an interactive DVD to allow you to pit your wits against other family members or to see just how clever (or stupid) you really are.
Anne Robinson, You and the Family
Television, Interactive, Family
2
Not Applicable
Buy DVD
Story

Who's the cleverest in your family? Is Dad a know it all or is grandma a closet clever clogs? Perhaps your girlfriend isn't the blonde bimbo you first thought she was and maybe, just maybe, you mother knows more about politics and the world in general than she's prepared to admit to. So, it's time to stop asking yourself these questions, pick up the DVD remote control and find out with the first ever Test the Nation Interactive DVD Game.

Already a popular television programme, this interactive DVD brings the same excitement and challenges of the smash-hit BBC TV series into your own home. All you need to play is your DVD player, a remote control and a willing set of participants. If you plan on playing as a family quiz then you'll also need some good old fashioned pen and paper to record your answers. This double disc interactive DVD game consists of The Great British Test and The National IQ Test. Presented by the no nonsense Anne Robinson, and with questions set and ratified by IQ expert Doctor Colin Cooper, this DVD allows you to put away that well used Trivial Pursuit board and finally join the digital age.

The Great British Test contains over 1000 questions on everything from the Millennium Bug to Mobile Phones. It can be played by individuals or as a family and you have to answer seventy questions in five sections just as with the popular television show. Jammed packed full of archive footage this game will be a trip down memory lane as well as a sideways look at recent events. Anne Robinson talks directly to you and offers her usual amount of encouragement or criticism based on your performance. And you thought that The Weakness Link was a tricky show.

Considering that this is simply an interactive DVD there is no point in examining the finer details of the picture and sound. Never the less, the picture is of a reasonable quality with only a small amount of compression artifacting present and you can see Anne Robinson's glare, and expensive face job, with ease. The sound is also reasonable enough with a short burst of the theme tune at the beginning of each round whilst the music gets more frantic as the timer runs down (and you start to panic that you still haven't decided on the answer). With this being my first attempt at an interactive DVD I can't compare the results with anything else, but either way, it vastly exceeded my expectations. Mind you, I was expecting something akin to the horrendous Philips CDV system - and that isn't saying much!

If you decide to play on your own the DVD will automatically keep score and give you the results at the end of the test. However, if you can indeed gather the family together without too many complaints or arguments, each individual can pit their wits against Anne and her questions keeping note of their answers as they go (as per the television series). And once the answers have been checked by a suitable neutral person (wheel on the grandparents for this one), the brainiest Brit is the one with the most correct answers at the end of the quiz whilst the one with the lowest score will be ribbed about it for the next few years.

The National IQ Test is a free bonus game which, although still fun, is a genuine and serious IQ test to find out just who is the cleverest (or stupidest) member of your family. You can either play individually, answering seventy questions from five sections (logic, observation, visual memory, reasoning and picture puzzles) or as a family group. As with the previous test, if you're playing by yourself the DVD will automatically keep track of your score and provide you with an accurate IQ rating at the end of the test. Multiple players will need to keep tag of their answers on paper and then check the results at the end of the test.

As an interactive quiz goes it's quite good. The questions are sufficiently random and there's some nice interaction between the player and quiz master. However, whilst the second disc containing The National IQ Test is reasonably quick to plough through, the Great British Test is a bit slow and tedious with the distinct possibly of some players becoming rather bored. One annoying thing I found was that there was no pause option in the Great British Test whilst the The National IQ Test allowed you to continue at every new section. And even more annoying, for me at least, my DVD player inexplicably stopped half way through the first test and left me fuming that I'd lost all my answers. Needless to say, I didn't redo the test and I just hope that this isn't a regular occurrence in interactive DVDs.

Annoying crash aside, the combination of the Great British Test and The National IQ Test is a great idea and there's enough questions to make each game random enough to make it more of a challenge. The interactive part of the DVD market is still in its infancy but with excellent packages such as this, it's surely an area which is sure to continue expanding. It's all good family entertainment worthy of a look in, and if you don't fancy a purchase then a rental is certainly worth considering for that one off family gathering.