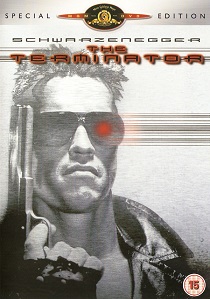 In the not to far distant future mankind is an endangered species. When an intelligent supercomputer was created and put in charge of a nuclear arsenal it perceived that mankind was a threat and launched an all out attack. With the machines in charge, and mankind helpless, they started to systematically hunt down the human race to extinction. However, the humans have a glimmer of hope in the form of resistance leader John Connor. In an attempt to stop him the machines send a ruthless cyborg back in time to kill his mother Sarah Connor.

Fortunately, the resistance were also able to send back a lone soldier, Kyle, to protect Sarah from the terminator. Kyle and Sarah are going to have their work cut out. Not only have they got to dodge the authorities, who naturally think that Kyle's vision of the future and his mission make him a bit of a fruit-cake with extra raisins, but that the terminator can't be bargained or reasoned with. And it absolutely will not stop until you are dead.

For a film produced on a shoestring back in 1984, the restoration work performed on this disc is nothing short of a miracle. The bit-rate remains impressively high throughout the film and the extensive night time scenes are handled superbly with no signs of artifacting or outlining, although at times it could be a little too washed out for my taste.

The re-mastered soundtrack is equally impressive. The surround channels are used extensively throughout along with plenty of LFE's during the later half of the film. However, where the effects are impressive the centre channel is quite a let down. At times the dialogue becomes so muffed it almost reaches the point of being unintelligible. It seems that the too much time has been spent on the surround channels at the detriment of the others.

Whilst the animated menu is nicely animated and scored, with echoes of Terminator Two, once a sub-menu is selected it turns into a static and boring affair. Most distribution companies tend to concentrate on the main menu whilst seemingly forgetting any subsequent menus. It certainly cheapens the overall effect of the disc and for a film with such a cult status it is a gross oversight. There's a second disc packed with extras including of a number of interesting deleted scenes, although it would have been nicer to have had a seamless branching version to see how these scenes would have worked out for ourselves.

Also included are a number of stills created by the fair hand of Cameron and a reasonable "making of" with input from Cameron and Arnie who's sporting some horrendous shorts. There's also the entire script on the DVD-ROM section of the disc.

I'm always suspicious of a company which produces a "collector's booklet" which turns out to be nothing more than useless information or a few pieces of paper stapled together. Fortunately, what we have here is an interesting set of production notes along with photographs of the casts, although most of the information in the booklet is repeated in the various featurettes on the second disc.

Overall this is a outstanding piece of cinema on a remarkable DVD package. The film sets it up perfectly for the massive budget sequel Terminator 2, and the original just shows what can be done without the need for expensive CGI special effects whilst models and stop-go animation work just as well. If you are at all a fan of the sci-fi genre then you should definitely add this disc to your collection. Buy it, or be terminated. It's just a pity about that sound.