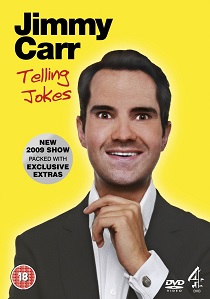 ReviewStandup ComedyComedy
Review Article Go back to homepage
Britain's most acerbic and satirical comedian, Jimmy Carr, launches marks 10 successful years in comedy with the release of his fifth live stand-up DVD and his comedy material from the 2008-2009 tour.
Jimmy Carr, The Audience
Stand-up Comedy, Comedy
2
1 Hour 29 Minutes
Thank you for supporting DVD365.net when you order using the link(s) below.
Buy DVD
Story

Jimmy's latest DVD features 90 minutes of fresh material that's simply too rude for television uncut - especially with some of the innuendo, sexual references and swear words that will have the bleep machine working overtime. This latest release sees Jimmy Carr at his best with a relentless barrage of one liners and putting down brave hecklers with equal panache and quick wittedness. Filmed earlier this year at a packed Bloomsbury Theatre in London during his latest mammoth tour, the jokes come thick and fast and at such a rate you're pretty much guaranteed to have forgotten 99 percent of them by the end of the show.

Jimmy has a reputation as being one of the hardest working people in comedy, and after performing to 300,000 people during his Joke Technician tour, you have to wonder just how he manages to carry out his television commitments as well as having some much needed time to himself. Touring continuously, no sooner does one tour finish, and after a well earned five week break, Jimmy is off on another tour. In fact, 2009 will see him celebrate his millionth tour ticket sold this autumn (and a nice bank balance to go with it too) before venturing on his next mammoth comedy tour - the Rapier Wit tour.

Given that this is a stand up comedy gig recorded in a theatre you'd have to be a little bit on the weird side to expect some sort of Hollywood blockbuster with million pound CGI effects and swooshing surround effects. Nope, all we've got here is Jimmy Carr stood on a stage telling Jokes. There's a couple of different camera angles at the front of the stage, plus a camera from the back of the stage which makes Jimmy jump (look out on the extras for that!), but the transfer is almost hardly worth talking about. Whilst it's never going to look like you're sat in audience with him, there's nothing wrong image quality and it's pretty much standard material for a comedy gig DVD.

Sometimes, the only let down is the soundtrack, where it becomes quite hard to hear any audience banter. Still, I guess you're watching the comedian and not the audience, but when the comedian interacts with the audience, it's important that you can hear what is going on without having your ear drums thumped by the laugher and applause. Fortunately, the 256Kbps 2.0 Dolby Digital soundtrack is more than up to the job and you can hear both Jimmy and the majority of the quips from the audience. It's never going to be like being there yourself, but it's as good as you're ever likely to get on this style of DVD release.

The menu has some basic animation but it's scored with some musical clips from The Red Hot Chili Peppers and Kanye West (heaven knows how much the licensing cost for those!?). Fans of Jimmy are sure to be more than happy with the bonus material on offer here, whilst the hard of hearing are also catered for with a useful set of subtitles on each of the extras (which spell out every swear word uttered - so you'd best avoid those if you're easily offended!).

First out of the blocks is Jimmy's Twitter Diary. Running for fifteen minutes, it contains the "best" of Jimmy's Twitters that he sent whilst on tour. Fortunately, it's not just a list of comments, as along with a collection of photographs and flying bits of text, Jimmy is also on hand to read out his thoughts. Still, it's not the most interesting of features and I soon good bored. However, things get more far more interesting in the twenty minute Comedy Central Special from New York. Filmed in America - a nation well known for its fickle comedy, unfunny comedians and no scene of irony, it's quite surprising the learn that Jimmy is actually quite a star out there and he's appeared on Late Night with Conan O'Brien twice and The Tonight Show with Jay Leno three times. His jokes are a little cleaner, and he's changed some of the terms for American ears, but it's another funny stand up routine that's worthy of a look in.

The final extra is the ten minute Bonus Stand Up Material. This is essentially material which was deleted from the Bloomsbury Theatre show and it contains plenty of additional banter with the audience (including one rather drunken looking bloke in the front row who had to go and pee) plus some retakes when he fluffed his lines. Given that his tour is such a long one, and if you were one of the lucky people to go and see him, there's also some topical jokes too - such as the inauguration of the new president of the United States. There's also a bit of interaction with a make-up lady who periodically wanders on to "power his nose" and a cameraman who is lurking at the back of the stage.

I do like Jimmy Carr and his no-nonsense and un-PC flavour of comedy. In fact, I was present at his Stockport show, and I've already got my tickets for his next gig there too. His brand of comedy may not be to everyone's taste - and let's face it, the 18 certificate means that there's going to be some offensive language used here (with plenty of swear words beginning with "F" and "C") so if you're easily offended then this disc should be given a wide berth. Needless to say, this DVD won't be airing on Channel Four without some substantial cuts or heavy use of the bleeper!

But given the rather crude nature of Jimmy's jokes, and the amount of bad language he uses, it always amazes me to see younger teenagers in the audience. Sure, I guess their parents can make an enlightened decision about such things, but I often wonder whether they should be there in the first place. Still, it least it gives them a little bit of kudos and, with the jokes coming thick and fast, I'm sure by the time they get home most of the jokes will have been forgotten (this nearly always happens to me!) plus they probably use the same language on a daily basis too!

If you've already got his Comedian and In Concert DVDs then it's pretty much a foregone conclusion to assume that you'll also be adding Telling Jokes to your collection too (are you seeing the pattern in the names yet?!). And with a good collection of extras, fans of Jimmy are going to be more than happy with his latest stand up release. However, if you like your comedy a little less on the offensive side, then you'll probably want to look elsewhere.