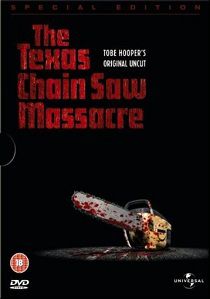 When Sally and the wheelchair bound Franklin Hardesty discover that the graveyard where their grandfather is buried has been desecrated in a bizarre and macabre manner they decide to check that the grave is still intact. So together with a group of friends they head out over the hot Texas plains to the near deserted town housing the graveyard and the long abandoned farm belonging to their grandfather. Whilst passing a slaughterhouse they notice a hitchhiker and decide to stop and give him a lift. After all, it is another blistering hot Texan day and the stench of the slaughterhouse is enough to make anyone gag.

However, the hitchhiker turns out to be a few pence short of a pound and promptly starts hacking at himself with a knife and lashing out at the curious but equally shocked Franklin. Quickly bundling the hiker out of the van the group proceed with their journey. With fuel in the van running low they decide to turn into a local petrol station for a fill up. Unfortunately, the station is out of fuel so they decide to stock up on the local meat products and head over to the old farm house until the fuel truck arrives the following day.

After arriving at the farm Franklin tells Pam and Kirk about an old swimming hole he use to use as a child. With the sun still beating down the pair decide to head off in search of the water hole and a refreshing dip. Whilst walking towards the water hole Kirk hears a generator chugging at a nearby farmhouse and, hoping to borrow some petrol for the van, heads over to the house to speak to the owner. However, this is the home of the psychotic hitchhiker they picked up earlier and a chainsaw wielding maniac called Leatherface. Let the butchery begin!

For a film made on such a small budget you won't be expecting a picture quality on par with a multi-million dollar Hollywood extravaganza, perhaps something more akin to a late night film on channel five. Although the budget and the ravages of time have not been good, the print is actually in a remarkable condition. There's a fair amount of colour and detail plus the picture is surprisingly free of picture imperfections, although it is very grainy at times. Whilst an occasional dust scratch or whisker is inevitable, the picture still manages to remain free from any artifacting and even manages a consistently high bit rate throughout.

With a minuscule budget you'll hardly be anticipating anything extraordinary from the sound department. Matters aren't really helped much by the fact that in 1976 stereo soundtracks were a few years away yet. As a result there wasn't much to go at on the DVD and you can probably dispense with the surround system for this film. You'll also need a tight reign on the volume control as there are plenty of moments when you need to crank up the volume to hear the dialogue only then to quickly lower it once the incessant screaming starts. Oh well, that's a low budget slasher movie for you.

When the packaging claims that it's a special edition then you're should be expecting something special from the extras. Well, they certainly can't be done under the trades description act here as the disc is positively bursting with additional material. For starters there's the Shocking Truth documentary which runs for nearly the same length of time of the film and is worthy of the cost of the disc alone. It contains some very interesting, and ultimately shady, details about the films production and its eventual cinema release. If that's not enough information for you then there's also a directors commentary including good old Leatherface himself. It's all interesting stuff indeed and it's all polished off with the usual Outtakes Reel, Trailers and Publicity Material.

The inspiration for the Leatherface character is 1950s Wisconsin murderer Ed Gein, whose domineering mother raised him in a God-fearing way and fed him with the belief that all women are harlots. Incapable of dealing with the death of his mother, Gein dug up her grave and brought her body back to the family house and would talk to her in despair. As Gein became more demented he dug up graves and ate human flesh before being arrested in 1958 for the murder of his second victim.

In 1976, Texas Chainsaw Massacre's original UK distributor had to submit the film to individual borough councils in order to get a certificate. The only councils to refuse theatrical screenings were Surrey and Strathclyde. Indeed, the film was subsequently labelled a video nasty and deemed unsuitable for the British masses by the British Board of Film Classification for twenty-five years until 1999. Overkill? Well, the BBFC were concerned that the workers in the Birmingham car plants would go on a killing and cooking frenzy. I always thought that those Brummies could be a little temperamental!