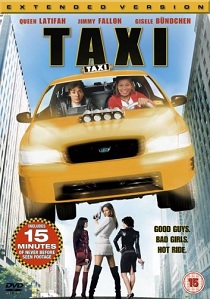 Belle is a newly qualified street wise speed demon of a New York taxi driver who aspires to be a race car driver. With her first customer of the day safely delivered, albeit slightly green looking, to the airport in record time she soon finds herself with an unforgettable fare in the form of the incompetent police officer Andy Washburn. As unlucky in his career as he is in love, the hapless Washburn has failed his last assignments and, disqualified from driving due to being completely useless behind the wheel, he decides to chase after a group of feisty, and extremely attractive, female bank robbers in the back of the nearest yellow cab.

Hailing Belle's taxi, Andy is soon in a passenger-seat hot pursuit in a surprisingly nimble, and highly modified, supercharged yellow cab as, being a fan of racing, Belle has added quite a few hidden extras to her cab. Being no slouch behind the wheel, Belle is soon on the tale of the bank robbers BMW but they manage to give them the slip. But realising that the bank robbers equally modified car is damaged, Belle suspects that they'll head for a specialised garage for spare parts and, much to her annoyance, Belle is roped into a stakeout.

Her hunch is right and the robbers soon turn up. But it doesn't take long for Washburn to make a complete and utter hash of the stakeout and another rollicking from his boss. But to make matters worse, not only has Belle missed yet another date with her increasingly annoyed boyfriend, but her taxi has been impounded as evidence. With her only hope of retrieving her beloved taxi, and avoiding punishment for a raft of traffic offences, Belle has no other choice but to continue her unlikely affiliation with Washburn.

For such a recent release the picture transfer should be nothing short of perfect. And that is precisely what we have presented here with some wonderfully rich and vibrant colours, a good level of detail and solid black levels throughout. Whilst the taxi's CGI effects are quite obvious, they blend in with ease plus with the large amounts of fast paced action throughout the crowded streets of New York, the picture holds up remarkably well with no signs of either artifacting or outlining. Again, given it's such a recent release there are no apparent problems with either dust scratches or other forms of print damage whilst grain is kept to a minimum.

Given the amount of hectic car chases that the film provides it would be rather criminal if the soundtrack didn't do it justice. Trouble is, being dialogue based where the one-liners make up the majority of the laughs, the centre channel ends up being far too dominant. Whilst the musical score and the occasional ambient effect finds it's way to the rear channels, on the whole, they are rather underused and only tend to come to life during the high speed car chases. However, when they do decide to show themselves they offer some impressive effects, whilst the stereo steerage and separation in the front channels is just as good. It's just a pity that the rears are somewhat forgotten for the rest of the film.

The menu system is cleverly animated and scored with various transition effects and cut scenes from the film playing in the background whilst the sub-menus are static and silent affairs. Upon inserting the disc an initial menu gives you the opportunity to either watch the Extended or Theatrical of versions of the film. Once selected the usual scene selection and special features, described in more detail below, are available for and I could see no discernible difference between the menus for either version of the film.

Although there's plenty of featurettes on offer, the main extra on the disc has to be the Audio Commentary from Director Tim Story. Given that Jimmy Fallon is so annoyingly unfunny it's rather unusual for me to welcome the fact that the stars are not on hand to provide a commentary. Never the less, the director manages perfectly well by himself and even provides some useful insights into the film, both the original French version and his creation, as well as the various locations and script. Sure, there's the usual back slapping comments to the various "incredible actors", but on the whole it flows well enough and there's not too many silent moments. The commentary is also available with subtitles so you can also skip the audio commentary and read his comments whilst you watch the film instead.

In the twenty minute The Meter's Runnin': Making Taxi featurette we spend most of the time behind the scenes with comedian and actor Jimmy Fallon. There's a nice introduction from him with references to the DVD release, but it's nearly a full three minutes until we get into some background detail to the film from the actors and director. However, when we do get to the detail, it's hardly ground breaking stuff, with most of the time spent on Queen Latifah and Henry Simmons commenting on their kissing scenes. But most annoying of all, throughout the featurette you have to endure Fallon messing about in a completely unfunny manner. Perhaps you have to be American to appreciate his brand of humour, either that or he's simply not that funny at all.

In the rather interesting five minute Lights, Camera, Bluescreen featurette, visual effects supervisor Ray McIntyre Jr. looks at the various CGI effects used in the film. He reveals that large amounts of the car scenes were actually done in the studio rather than out on the road on the back of a trailer. Given the long setup times between retakes, and that the streets of New York are busy at the best of times, with plenty of curious locals to hinder matters, it was a wise decision. It's all interesting stuff and, apart from the obvious car morphing effects, it certainly goes to prove that the camera can indeed lie with many of the effects seamlessly integrated into the film.

Next up is the five minute Tour Guide: Jimmy Fallon featurette. Basically, a camera follows Jimmy as he wanders around the set. He also reveals his unfunny Saturday Night Live roots, even admitting he's not a good actor (jokingly probably, but he's not far off the mark), but the information he provides is reasonably interesting, if only to prove he hasn't got a clue of what goes on and around a film set. The twenty minute comedy central featurette Reel Comedy: Taxi probably has the unwelcome distinction of being even more unfunny than the film. Presented by comedy central guys R. Ben Garant and Tom Lennon they travel around New York in a taxi interviewing the various cast members with the assistance of plenty clips from the film.

Next up are four Deleted Scenes. They can be either played individually or all at once, not that there's much worth while looking at here as they simply consist of yet more unfunny scenes of Washburn on foot patrol in Central Park, Belle messing around the an identity line up and Washburn accidentally trashing Belle's apartment-come-garage. It's fair to say that neither scene is funny, but considering the entire film is hardy a barrel of laughs in the first place, it's hard to see why they were removed. Picture quality wise, they are as good as the film, but are presented without the Dolby Digital 5.1 soundtrack.

In the short, and frankly rather pointless, Beautiful Criminals feature, the various beauties which make up the Brazilian gang are presented as a montage clips from the film. It's certainly padding material but, hey, I'm not going to be complaining about these ladies and their bikinis. Things are rounded off with a short Inside Look at the rather dodgy looking Rebound staring Martin Lawrence. Considering it boasts being from the director Daddy Day Care it probably deserves to be given a very wide berth indeed. All in all, the extras do manage to salvage some much needed credibility, but I still fear the worst.

Not satisfied with altering history to suit themselves, Hollywood always seem to think they know better and have to go and remake those "funny sounding" foreign films for a good old Uncle Sam audience. Trouble is, they're usually not very good and judging by some of the stinker remakes such as Nikita (AKA The Assassin), I didn't really hold up much hope. Still, with Luc Besson managing to perform that rare feat of a successful crossover from French cinema to Hollywood with titles such as Kiss of the Dragon, The Fifth Element and Leon under his belt, things really couldn't be that bad, could they?

Having seen the original French version of Taxi I knew what madness and mayhem to expect, but nothing prepared me for the shear awfulness of this film. I don't think a film has ever made me want to hit my head against a brick wall, but Taxi came very close to it with some absolutely awful acting, unfunny jokes and extras from some of the Comedy Central team which were in blatant contravention of the trades description act. Laugh, I would have found going through open heart surgery without an anaesthetic more amusing than this!

Even the rather delicious looking, and scantily clad, Brazilian bank robbers offer scarce consolation for what you have to endure. Just do yourself a favour and, like a vomit filled unlicensed taxi on a Friday night, avoid buying this film. You must excuse me, I'm off to bang my head against that wall.