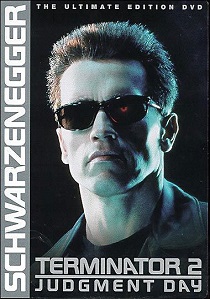 Skynet, the self aware computer waging a war on humans in the 21st century, has managed to sent a second terminator back in time. However, this time it has targeted the leader of the human resistance, John Connor, whilst he is still a teenage boy and the T-1000 model it is far more advanced than the T-800 model sent to kill Sarah Connor.

Fortunately, the resistance has also managed to send a terminator, albeit an earlier T-800 model, back in time hoping to find and protect John before the T-1000 locates him. Meanwhile, Sarah Connor has been locked-up in a mental hospital after all of her ridiculous babblings of robots from the future and the looming Armageddon.

The picture is quite remarkable. It is bright, colourful and with no visible signs of artifacting. The film titles with all of the flames of the nuclear inferno were handled superbly, although the picture imperfections were easily visible. The best part of the introduction was the truck's grill. It was bright, perfectly stable and with no noise what-so-ever. I remember this scene well as my laserdisc version of the film struggled to give a stable picture. However, I do feel that the picture can be a little overbearing with too much contrast at times.

The sound and channel separation on this disc is simply stunning. During the action phases at the beginning of the film, and the battle with the police at Cyberdyne, the subwoofer is given a mammoth work out. Although the surround channels are not fully employed throughout the film, when they are used they are intelligently used with atmospheric music and effects with the usual gunfire, explosions and helicopters used to great effect.

This THX certified disc has an interesting extra which true home cinema fans will really relish. THX has developed a new system called Optimode where the home user can fine tune both the audio and video components. A number of menus allow the user to test the contrast, brightness, colour, hue and aspect ratio settings. It also has a number of tests for speaker phases and LFE channel crossover.

I'm always suspicious of a company which produces a "collector's booklet" which turns out to be nothing more than useless information or a few pieces of paper stapled together. Fortunately, what we have here is an interesting set of production notes along with photographs of the cast and immense chapter listings of both discs.

There are so many extras that they take up their own disc resulting in a total running time of over 6 hours on one DVD! The special edition has a number of interesting restored scenes. Amongst them are a number of scenes between John and the Terminator where the cyborg explains some of the limitations of his neural-net processor and John's attempts to reprogram him. There is also an expansion on John's attempts to 'humanise' the cyborg with a failed attempt at teaching him to smile. There are also plenty of other restored scenes which explain more about the T-1000 and how Miles Dyson's obsession led to the formation of Skynet and how they destroy all of the computers at Cyberdyne's labs.

Interesting enough, there is an insert in the disc mentioning that 'some of the advanced features' used during the creation of the disc may cause navigation problems on some DVD players. Fortunately I had no such problems with my Pioneer player. Perhaps these could be similar problems which certain players encountered when The Matrix was released.

If there was ever an example of a film company flogging something to death then you need look no further than this disc. I'm certain many of the owners of the previous editions of T2 are a little miffed to say the least. However, I'm sure that these owners are still desperate to learn whether they should consider buying this disc.

Well the answer to that question depends on what edition you own. If you already own the initial special edition then it would probably be hard to justify splashing out more cash for another "Making of", although the newly re-mastered Dolby and DTS ES soundtracks make it a little more tempting. However, if you already own the standard edition of T2 then you should definitely be reaching for your credit card. Let's just hope they can't find yet more content to add to another special edition!