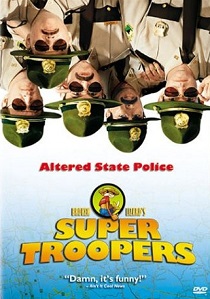 A day in the life of the local division of the Vermont highway patrol is an easy and happy one. They spend most of their working day, if that's what you can call it, messing about and joyriding in impounded cars. When they do manage to make it onto the highways there is always some trick being played out on some poor unsuspecting motorist. On the few occasions when they do manage to make an arrest the prisoner is soon embroiled in some wacky joke and fearing for their safety.

The troopers are about to receive a very loud wakeup call. When the local governor announces that there are to be budget cuts to the local law enforcement budget, the Vermont highway patrol becomes a prime target for being scrapped and their jurisdiction handed over to the local police force. There's only one thing for it, the troopers must pull their act together and solve some real crime. Their prayers are soon answered when they uncover a huge drug smuggling operation. However, they must solve the crime before the local police force them out of their jobs for good.

The picture is bright and colourful with huge levels of textures and detail. Both exterior and interior scenes are handled with ease with the bright outdoor scenes of Vermont looking particularly impressive throughout. The picture remains free from any signs of artifacting or outlining and there's no signs of any dust scratches or whiskers on the print. The bit-rate also remains impressively high during the film.

With the film mainly dialogue based there isn't much requirement, let alone use, of the surround channels. However, the dialogue is crisp and clear in the front channels and the dialogue remains firmly locked in the centre channel. Even when some action does kick in the volume levels remain constant and there's never any need to dive for the volume control. All in all the picture and sound reproduction is rather good and it puts many higher budget films to shame.

The menu is cleverly animated and is accompanied with a plenty of sound effects. One moment all is pleasant and peaceful until a police car comes crashing through a road side advertising board. Various cast members then keep appearing at the car windows. All of the other menus then become static and silent but each menu is well presented and the various options easy to identify and select.

The extras are reasonable enough with an audio commentary from the comedy team behind the film and a number of outtakes and deleted scenes. However, I was so numb with boredom from watching this film that I was almost at breaking point when I discovered that the outtakes were about as hilarious as a bout of food poisoning. It's always a bad sign when you don't even find the outtakes funny. There's also an equally unfunny featurette and alternate ending. It all rounded off with the usual sets of theatrical trailers, including an equally unfunny looking martial arts film.

I'm not quite sure what this film is trying to be, because it sure isn't a comedy. It makes the Police Academy films seem like award winning comedy classics. I must have sat through the whole if this film looking at my watch, picking my nose (well maybe not) and waiting for something to make me laugh. There wasn't even the faintest sign of a chuckle and I was finding it hard to understand just how people were suppose to find this film funny. Even adding alcohol to the equation failed dismally.

It's not as if I'm the prudish type when it comes to films. After all I rate American Pie and Road Trip as some of my all time favourite gross out comedies. Perhaps I was just expecting too much from the relatively unknown, in the United Kingdom at least, comedy team called Broken Lizard. I hadn't heard of them before and I'm sure I won't be hearing from them again.

Special Features
Related Articles
Rise Of The Planet Of The Apes, Medici: Masters of Florence, Churchill, The Autopsy of Jane Doe, Forsaken, War and Peace, The Game, Human Universe, Blood, Wonders of Life, As Good As Dead, Exit Humanity, The Slap, Manhunter: 25th Anniversary Edition, Wonders of The Universe, The Sinking Of The Laconia, The Day Of The Triffids, The Water Horse: Legend of the Deep, Zodiac, Running with Scissors, The Bourne Identity: Special Edition, The Bourne Identity, The Bourne Supremacy, The Corruptor, The Ring : Collectors Edition, The Ring, The X-Men 2, The Planets, Succession: Season 2, The Bay of Silence, Last Moment of Clarity
The Abyss
The Babymakers, The Slammin' Salmon, Strange Wilderness
The Dukes Of Hazzard: The Beginning
The Slammin' Salmon
The Senator, Duck Duck Goose, Hotel Transylvania 3: A Monster Vacation, Hotel Transylvania 3: Summer Vacation, Playmobil: The Movie, Playmobil: The Movie, The Day Shall Come, Drunk Parents
Comments
RecommendedView