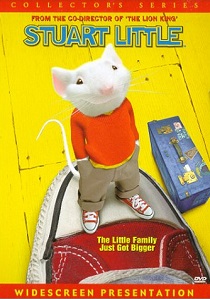 ReviewFantasyHugh Laurie
Review Article Go back to homepage
When the Little family adopt a new member of the family they pick a little boy called Stuart who looks just like a mouse. Whilst the family adore him, one member of the family is determined to be rid of him - Snowbell the cat.
Hugh Laurie, Geena Davis, Jonathan Lipnicki, Michael J. Fox, Nathan Lane, Chazz Palminteri, Bruno Kirby, Steve Zahn, David Alan Grier, Allyce Beasley
Fantasy
1
1 Hour 25 Minutes
Thank you for supporting DVD365.net when you order using the link(s) below.
Buy DVD
Story

When the Little family go to an orphanage to adopt a new family member their son George insists they bring home a little brother. His words are taken a little too far by his parents when they pick an enchanting young 4½ inch high mouse called Stuart. George is disappointed with his new brother and refuses to accept him as a member of the family. However, things soon change when Stuart sails George's model boat in a race in central park beating the cheating opposition.

Stuart and George soon become inseparable, but things can only get worse for Stuart as the family cat, Snowbell, is not too happy at having a mouse as his master and together with his alley cat friends plots to get rid of him for good.

The picture is sharp with rich and vibrant colours which have a beautiful amount of detail. The CGI used on Stuart is absolutely amazing, especially during the close up scenes which pick out each and every hair on his body. His facial expressions are just as good as are the faces of the talking cats.

However, it is the sound that stands out the most in this film. The dialogue is fixed in the centre channel without any bleeding to the other channels, and although there are no LFE's of any note, the rear channels are kept busy for the whole of the film with wonderfully timed effects and the general musical score. It really was a pleasure to hear and it really added to the enjoyment of the film.

The menu is pleasantly scored and animated with an Stuart appearing in each of the major menus. However, it is the amount of extras which really adds to the value of this disc. I thought that the visual effects section of the disc was the most interesting and you can't escape the CGI gag real made famous by 'a bugs life'

Based on E. B. White's classic children's book, this is a charming adventure which will be enjoyed by the whole family, especially the 'bigger' kids (like me) who will be glued to the screen in a manner in which is normally only reserved for Disney. The only thing that annoyed me slightly was the fact that nobody actually noticed that Stuart is a talking mouse, oh, and Hugh Laurie's awful American accent is enough to make you scream for an eternity - but then again, it didn't do him any harm in his hit television series House!