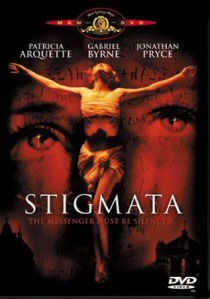 ReviewHorror
Review Article Go back to homepage
Frankie is an ordinary hairdresser, she lives for fun and doesn't believe in god. One day her mother sends her some rosary beads from a dead priest, this is when Frankie starts to exhibit the "Stigmata".
Patricia Arquette, Gabriel Byrne, Jonathan Pryce, Nia Long, Thomas Kopache, Rade Serbedzija, Enrico Colantoni, Dick Latessa
Horror
1
1 Hour 42 Minutes
Thank you for supporting DVD365.net when you order using the link(s) below.
Buy DVD
Story

The film revolves around Frankie and the recurring wounds called the Stigmata. Father Kiernan is sent to investigate Frankie's claims and is very surprised to find that she is an atheist, as he explains to Frankie that only deeply spiritual people receive the "gift" of the Stigmata.

As time goes on, and Frankie receives each one of the five wounds (wrists, feet, back, forehead, and finally a spear in the side), Father Kiernan struggles to find a way to stop things before the final wound that could prove the coup-de-grace. In the meantime, he comes across a stubbornness in the church which he cannot understand.

Picture quality is in general good, although there is the odd moment that lets the side down. Look for the scene where Frankie receives the wrist wounds in the bath, it looks a tad grainy. Sound is some of the best I have yet heard, surround is used at the drop of a hat, but far from ruining things by using it anywhere, it works a treat, especially when the birds fly up in the church at the beginning of the film.

Not believing in God myself, I wasn't sure what I was going to make of this film, on the one hand I was expecting a big budget X-Files style film, and on the other side I was expecting a "isn't the church wonderful". I was pleasantly surprised. Not only does the film keep away from the subject of the bible, but it also shows a very sinister side to the church. It is in fact the side I believe, one that the church is there to control the masses and has nothing to do with beliefs in a higher being. The slightly insane side of things is born out by the treacherous Cardinal Houseman, who definitely goes too far at the end of the film!

Incidentally, those of you who are fans of The Smashing Pumpkins will be pleased to hear that none other than Billy Corgan has supplied a lot of the music, along with Australian song stress Natalie Imbruglia. Another interesting feature is the ability to watch the film with either its theatrical ending, or the directors ending...Nice touch.

All in all, this is a must have DVD in my opinion. Forget the religious undertones because they just don't get in the way, forget the occasionally iffy picture, just buy it.