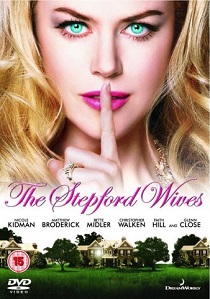 When, thanks to a disgruntled game show contestant, the high-powered career of Manhattan TV Executive Joanna Eberhart comes to an abrupt end, she suffers a complete nervous breakdown that even electro-shock treatment has trouble dealing with. Determined to move Joanna from the relentless pressure of big city life, her downtrodden and somewhat distant husband Walter Kresby moves the family to the affluent and idyllic Connecticut community of Stepford to live a happier and much simpler life.

Arriving at their new home, the family are welcomed with wide open arms by local queen bee Claire Wellington and her dashing husband Mike. But there's something strange about the community of Stepford and it doesn't take the city wise Joanna long to notice that all is not right as the women are uniformly beautiful and happily subservient to their nerdish husbands. And much to the delight of her husband, whilst the husbands attend their own exclusive clubhouse, the wives are happy to shop for food for the family and discuss the latest cookery books. And let's not even go near the bedroom!

Her suspicious come to a head when one of her new friends, and recent Stepford resident, writer Bobbie Markowitz, suddenly changes from her usual scruffy appearance to the perfect home maker who longs to only serve her husband and family. There's only one thing for it, Joanna must break into the clubhouse to find out just what happens behind closed doors, whilst husband Walter has already been introduced to the delights of Stepford life and can't wait for his wife to join the rest of the willing wives.

The picture is wonderfully rich and colourful with some superb textures and colour tones. Most of this is deliberate, with an attempt to recreate those 1950's television images of an American woman dressed in a bright and flowing dress happily preparing an evening meal for her husband. Deliberate or not, the image quality is fantastic with a clarity that only DVD can reproduce. Whilst the indoor scenes, especially those in the club house, are much darker than most, image quality remains high throughout with little or no sign of artifacting or outlining. With the lavish sets and costumes, the film will have come suitably equipped with a budget to match. As a result the transfer shows no signs of dust scratches or other picture imperfections.

The 448Kbps Dolby Digital soundtrack is certainly an interesting one. At first you may be under the impression that there's either something wrong the DVD or you've forgotten to fully turn on your surround system as the only activity for long periods of time is solely in the centre channel. However, once the musical score or effect is required the whole soundstage bursts into life with a hive of activity in both the surround and front stereo channels. It takes a lot to impress me, but this simple use of the sound channels is highly effective and essentially what the 5.1 sound format was created for.

The menu is pleasantly scored with the films title music whilst the menu is animated with a number of cut scenes from the film. Whilst only the main menu is animated, with subsequent menus static and silent, they do go through a nice transition effect before changing. Extras wise, whilst there's a definite "Damned if you do, Damned if you don't" mentality about extras, as whenever a film has a relatively poor showing at the box office there's always some hope for the sell through DVD sales. And what better way to increase interest in a title than by packing it full of extras.

The main extra is the detailed audio commentary from director Frank Oz. Whilst it would have been nice to have had some input from the actors, Frank provides a continual stream of information on the cast, crew and storyline, including plenty of post production editorial cuts plus the ever so handy revelations about CGI touches. Another welcome edition is the subtitle track which enables the viewer to watch either the film with the main audio and commentary subtitles or the audio commentary and main subtitles. It's such a simple edition, but highly effective.

The twenty minute A Perfect World: The Making of The Stepford Wives featurette looks, unsurprisingly, at the making of the film. There's interviews with the director, most of the production crew and the various cast members. Whilst some of the information has already been revealed by Frank Oz in the audio commentary, there's plenty of information on the construction of the various sets and locations around Connecticut. They always claim that the camera never lies, but this feature certainly goes someway to disproving this with some wonderful design detail on what is essentially a giant set.

The three minute Stepford: A Definition featurette asks numerous cast members and crew what they think a "Stepford Wife" is. Although it's a bit of padding material, it certainly goes to prove just how simple things, such as a book, can have such an influence on society. The six minute Stepford: The Architects featurette interviews screenwriter Paul Rudnick and director Frank Oz about how the remake came about. Although there is some additional information on the background to the original film, there's plenty of repeated film clips and behind the scenes footage.

The ten minute The Stepford Wives and eight minute The Stepford Husbands featurettes look at the male and female characters in the film. Both featurettes contain the usual back slapping interviews with each actor saying just how wonderful everybody else is and quite why they couldn't be merged into a single featurette is beyond me. Still, it certainly pads out the extras list nicely.

For a film that runs at under ninety minutes there are six fully completed Deleted and Extended Scenes. But whilst director Frank Oz provides a commentary for the main feature he fails to provide anything for the deleted scenes, although, to be fair, he does make some passing references to them in the main commentary. I can only assume they were removed for pacing purpose, but considering the film was rather pedestrian at times, it seemed a little odd to remove some of these scenes.

Next up is the Gag Reel. These can be a bit of hit and miss and unfortunately this one is a bit of a miss as Christopher Walken scowls at people who fluff their lines or burst out laughing (usually Nicole Kidman). Still, it's nice to see that even the best of actors can have a silly day, even if you're not really sure just what they heck they are laughing at. Things are rounded off by the Teaser and main Theatrical trailer.

I already knew that The Stepford Wives was a remake of the 1970's classic, but I was fortunate enough not to know what the storyline really entailed. But upon seeing that Christopher Walken was amongst the esteemed cast I instantly knew that this was not going to be any old movie, and sure enough I wasn't disappointed. Whilst the film can be rather slow in places, and it's not as funny as it likes to think it is, there's certainly enough star power to make you sit up and take notice.

Nicole Kidman stars in yet another film (does she ever take a holiday?) and she is perfect for the role of Joanna Eberhart. Even Matthew Broderick as the rather henpecked and geeky looking Walter Kresby is perfect, and if you ever needed a slightly "out there" and mysterious character then Christopher Walken is sure to be on most director's speed dials. In fact, the whole cast are pretty much perfect for their roles and it is this simple fact that single handily manages to keep The Stepford Wives from falling flat on its face.

Never the less, the film still lacks that certain little sparkle and with the amount of rich colours, highly charged orchestral pieces and its dark undertones, you could almost be in a Tim Burton movie with Danny Elfman supplying the score. Trouble is, you aren't, and if the producers really wanted a Burton style vision they really shouldn't have bothered with director Frank Oz and simply gone for the genuine article instead.