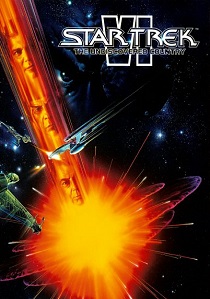 When the Klingon moon of Praxis, their primary energy source, suffers a catastrophic disaster their home world is threatened by the poisonous after effects. Unable to continue with their massive military budget the federation decide that it's time for peace and offer an olive branch.

Before they are due to stand down, Spock volunteers the crew of the enterprise for one final mission. They are to escort the Klingon Chancellor Gorkon on a diplomatic mission to earth to negotiate peace with the federation. However, when Chancellor Gorkon and several of his officers are murdered in cold-blood the blame is placed on Kirk and crew. The accusations are fair as the Enterprises log's appear to indicate that a number of photon torpedoes were fired at the Klingon vessel.

With calls for an all out war with the Federation, Kirk is put on trail on the Klingon home world, and although the evidence is circumstantial, he is found guilty and sent to a penal colony on a frozen waste land for the rest of his life. It is left to Spock and the crew of the Enterprise to uncover the real murderers and prevent another assassination attempt on the Federation president whilst rescuing Kirk and Bones from the impenetrable penal colony.

The picture is rather disappointing with a below average bit-rate throughout the film. Although there were no signs of artifacting or outlining, the darker scenes were grainy and only slightly better than the video cassette version. Another major disappointment was the non-anamorphic print. If Paramount are planning on releasing all of their "family jewels" in this manner, I'd hate to see their back catalogue material.

The sound is first-rate with some good use of the surround channels, especially at the beginning when Praxis explodes and the energy wave travels from the front to the rear of the soundstage. Although not as good as First Contact, the ambient effects on the starships and in the penal colony also standout with some excellent separation and clear dialogue in the centre channel.

As usual, the extras are up to Paramount's poor standards with only the Theatrical Trailer and Teaser Trailer. However, the collectors edition comes in a shiny box with an additional CD containing some rather worthless demos of dodgy games feeding off the Star Trek name. Even the menus remain static and unscored.

I'm glad this was the final film of Kirk and Company as they couldn't even manage to fight the battle of the expanding waist and receding hairlines. However, this is still a good film with the crew of the Enterprise putting in a good performance, although the film is stolen by the excellent Christopher Plummer as General Chang.