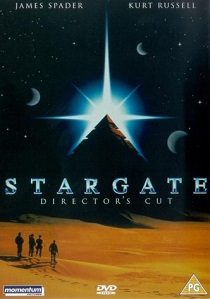 Dr. Daniel Jackson is expert on ancient Egypt whose ideas are far from the mainstream and as a consequence his theories are ignored and lampooned by the science community - how many of our famous scientists have suffered the same fate until their theories were proven? After yet another failed presentation he is approached by Dr. Catherine Langford, also an expert on ancient Egypt, to help decipher some ancient text from an item her father had uncovered.

Daniel quickly manages to understand a set of symbols that had the scientists baffled with an approach even they hadn't even considered. Unknown to him, Daniel has managed to decipher a set of instructions for an ancient stargate that was discovered during an archeological dig in Egypt in the early 20's. The gate was left by a technologically superior race some 10,000 years ago, just as the ancient Egyptian civilisation came to an end. It is portal device to the other side of the universe and the unknown (just how the scientists know this is a mystery to me).

Daniel and a group of special forces travel through the portal to a strange desert planet inhabited by a group of people speaking an ancient Egyptian language with no written language. However, in doing so they have unwittingly re-opened a link to earth that the ancient Egyptians closed to prevent an evil ruler from ever returning. Matters are made even worse when Daniel discovers that he has insufficient information to decipher the symbols in order to return home.

The picture is bright and colourful without any signs of artifacting or outlining and has a high bit-rate throughout. The bright desert scenes, as well as the darker interiors, are handled admirably and there is a surprisingly lack of picture imperfections or noise. It is certainly a far cry from the initial release which suffered from an intensely grainy picture. The only time the picture suffers slightly is when the restored footage is added to the film, and even then it is nothing to get worried about.

The edition of the disc contains both a DTS and Dolby Digital soundtrack. Although the DTS soundtrack is not as dynamic as more recent films it is still much better than the Dolby Digital track. All of the channels are used to good effect, especially when traveling through the portal, and there are few occasions when the surround channels are idle. It's not demonstration material, but it will certainly give your system a dusting.

The menus are ingeniously animated and scored, and too be honest, quite remarkable for a region two disc. The extras are reasonable enough with the usual Theatrical Trailer and a Director's Audio Commentary that gives quite an interesting insight into the film, its production and budget restraints.

This commercially distributed disc is also encoded as region eight so it may appear somewhere in business class on an long haul flight. This disc is also the second release on DVD, with the first released in 1998 with no extras and awful video quality.

Fortunately, or not for owners of the first edition, this version offers an excellent new video transfer and DTS soundtrack. The film certainly offers a different view point on the subject of ancient Egypt and it even spawned a successful television series. If you are a fan of science fiction then it is definitely worth investigation this disc, especially now that we have the definitive version of the film on DVD.