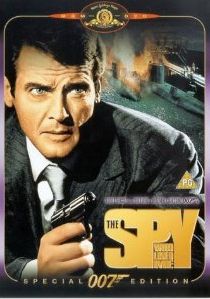 When the British loose a nuclear submarine at sea, they discover that someone has perfected a way of tracking submerged submarines and that the technology is being offered to the highest bidder. The British decide to send James Bond to Egypt in order secure the tracking device before it can be sold to another country. When the Russians loose a submarine, and they too are offered the technology, they send their best agent Major Anya Amasova, otherwise known as Triple-X to Egypt to recover the microfilm.

At first the pair fight against each other in order to recover the microfilm, but the British and Russians decide to pool resources and the two agents are ordered to work together. Fingers soon point towards the reclusive shipping billionaire Carl Stromberg who plans to use the submarines and their nuclear arsenal to trigger the start of world war III forcing the survivors to live in his undersea world. Trouble is, Stromberg is not the only person 007 has to fight as Anya discovers that it was James who killed her lover on a previous mission and she vows to get her revenge once the mission is over (but not before Bond has no doubt charmed her into bed first...).

Similar to the previous Bond films in the series, although the picture is bright and colourful enough, the picture still suffers from the occasional dusk speck and other picture imperfections. However, the quality of the film stock is gradually improving as each film is released and the re-mastering performed here is commendable enough. However, it is the DVD technology which is exposing some laughable special effects. Although Stromberg's submarine swallowing tanker looks realistic enough, the Atlantis base looked so much like a model it was absurd.

However, it is the cracking soundtrack which is the best part of the film. Finally we get a decent re-mastered Dolby Digital soundtrack which, apart from the Brosnan films, does a Bond film justice. There's a reasonable amount of rear effects, but it can sound a little muddled at times, but the dialogue is well placed in the centre channel and there's no need to keep adjusting the volume. Yet, it is the late seventies electro-pop incidental music which sounds incredible and really adds to the frantic pace of the film. There's also some fantastic locations in Egypt and the initial skiing scene in the Austrian Alps is just fantastic, with the unravelling union jack parachute being the perfect start to the film. The scenery certainly reminded me of the other wonderful alpine settings in On Her Majesties Secret Service.

Again, the menu system is simple, but brilliantly animated, with the catchy electro-pop incidental music and some nice cut scenes from the film. I actually sat and watched the menu for about five minutes before even starting to watch the film. The extras are superb with yet another interesting "making of" documentary narrated by the ever present Patrick Macnee.

This Bond film must have the coolest baddie in the form of Jaws and the greatest Bond gadget with the Lotus esprit that becomes a mini-sub. Along with the best ever Bond opening, this film has to be one of the best, if not the best. I can't praise this film enough, go buy it!