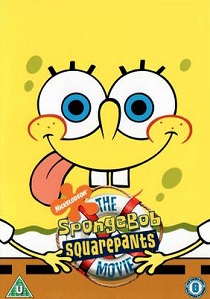 SpongeBob Squarepants is a sea sponge who lives in the underwater land of Bikini Bottom. But Bob is no ordinary sponge as he looks remarkably like a common kitchen sponge and even wears square pants (Oooh, I wonder where he got his name from?!). SpongeBob works at the Krusty Krab Cafe and, being employee-of-month for 374 consecutive months, when owner Mr. Krabs decides to open another store Bob naturally expects that big promotion to manager. However, when that promotion goes to his arch rival Squidward, SpongeBob is naturally upset at not being given his chance for that big break..

But there's a plot afoot (or should that be plan Z) from the evil Plankton. Owning the less successful fast food cafe Chum Bucket, he steals King Neptune's bald patch covering crown and plants evidence blaming his rival Mr. Krabs. Naturally, when King Neptune pays a visit to the new Krusty Krab Cafe he doesn't have a happy meal in mind and freezes Mr. Krabs. This gives Plankton the opportunity to steal the secret recipe to his burgers and launch his plan for world domination. And thanks to his dastardly designed Chum Bucket merchandise he'll soon have the means to carry out his plan.

But before King Neptune can turn Mr. Krabs into fish sticks, SpongeBob asks whether he and his best friend Patrick can have the chance to retrieve the crown and prove that his boss is innocent. Having to use a paper bag as a crown he's not feeling particularly generous, but with his caring daughter Mindy on hand she can always turn him into putty. So with a temporary reprieve granted, SpongeBob and Patrick leave the relative safety of Bikini Bottom and head off for Shell City and the evil Cyclops which lurks within. Can SpongeBob Squarepants finally become a man and save the day? Not if Plankton can help it.

Given that the world of Bikini Bottom is presented as 2D animation there isn't too much scope for picture problems, plus being cartoon characters there's plenty of room for mad colouring and textures too. This all results in a cracking picture transfer with some wonderfully rich colours and solid blacks without any hint of problems with either artifacting or outlining. It's also the perfect material to get the best out of your large plasma or LCD screen without it having to burst into any form of effort. The live action scenes with David Hasselhoff don't blend in particularly well with the animation. Still, given it's wonderful tongue in cheek nature I suspected that it was somewhat deliberate and really didn't matter.

The disc is accompanied by three 448 Kbps Dolby Digital 5.1 soundtracks in English, Dutch and German, and being dialogue based there is very little need for anything explosive in the sound department. Still this is a cartoon we're talking about so there's always time for silly or outrageous sound effects. There is the occasional and effective use of the surround channel, with the musical score and dramatic ambient and directional effect finding their way to the rears, whilst the beauty of this style of animation is that the character mouth movements are surprisingly accurate in whatever language is used. It's all very simple, but surprisingly effective and involving. Not bad for a simple bit of animation eh?

If you want to judge a film by the nature of its menu system then upon seeing the menu system for SpongeBob Squarepants : The Movie you'll be wanting to slip on that straitjacket and ring for those nice men to come and take you away to that nice quiet place. With plenty of funny cut-scenes from the film playing in a small window as well as the various characters from the film whizzing about the screen you'll be laughing before the film has even started. However, you're soon brought back to earth (or should that be ocean?) by the static and silent sub menus.

As for the extras, they are all very child friendly with plenty of easy to understand dialogue whilst being just as interesting to an older audience. There's also a surprisingly good selection of extras with just about every cast member appearing in main featurette whilst the enthusiastic director and creator Steve Hillenberg is always on hand to offer some nuggets of information.

In eighteen minute The Absorbing Tale Behind the SpongeBob SquarePants Movie featurette we get to meet the many faces behind the voices, including Scarlett Johansson, Alec Baldwin and David Hasselhoff (who both admit to only being in the film because their kids love the characters). Director and SpongeBob creator Steve Hillenberg is also interviewed at great length and goes on to talk about his love of the sea and the original ideas for both the characters and the movie. It's an interesting featurette and there's quite a few behind-the-scenes clips of the various cast members hard at work in the recording studio. However, being aimed at children, there can be quite a few "big words" which might confuse those little minds. Whenever they occur the picture freezes and a dictionary pops up and explains the word in question. It's a good idea, but considering that children are hardly going to be interested in this feature it's all a little condescending.

In fifteen minute Case of the SpongeBob featurette a couple of annoying children who can't act look at real life sea creatures with narration and descriptions by director Steve Hillenberg and the legendary marine expert Jean-Michael Cousteau. Each of Bikini Bottom's characters is introduced by Steven Hillenberb whilst its real life counterpart is described by Jean-Michael Cousteau. It's certainly some fun and interesting education for the kids, and even adults as I picked up a few few things I never knew, whilst it's all depressingly rounded off with a look at dying coral reefs. Still, it's the only way the message of protecting our natural habitats, both above and below the sea, can be put across.

Next up is twenty minutes worth of Animatics. Introduced by director Steve Hillenberg there are a number of original animated storyboards, along with the original dialogue read by the actors, from various sections of the film. It's interesting enough, but I find these sort of things a little tiresome at times and I'd much rather watch the real thing. Although obviously a child friendly film, I suspect that this sort of material will be of little interest to the younger viewer. Even so, parents or film fans in general may find it of some interest and it's nice to see just how close the final film is to the original storyboards.

The three minute Saving the Surf featurette offers some valuable information about protecting the beaches and seas from pollution. Surfrider Foundation members Chad Nelson and Matt McClain exclaim the wonders of the beach but then go onto mention the depressing issues of water pollution from chemicals, sewage and litter. Although it contains examples of American pollution problems it is still something that affects us all. Using clips from The Hunt for Red October and Das Boot, things are rounded off nicely with the hilarious Teaser Theatrical Trailer for the film. It's just a pity that with Hillenberg's enthusiasm for his character didn't go as far as providing an audio commentary. Still, being a kids film I guess there wouldn't have been much need, plus with three soundtracks it would have been a little hard to shoehorn onto the disc.

It seems that the more obscure a name of a character or the basis of a cartoon, the more adoring fans and cult followings it breeds. And most of these fans aren't children or idle students flipping through the day time television channels either. Yup, those slightly graying BMW owning suburbanites can be counted as fans too. With cartoon titles such as Ren and Stimpy, Pinkie and the Brain and Dexter's Laboratory (when are we going to get these titles on DVD!?) gracing Saturday morning television, it was only a matter of time better one of them followed the successful antics of the Rugratts onto the big screen.

Yet, growing up with such cartoon titles as Tom and Jerry and Danger Mouse, diving into the various cartoon characters of today's younger generation can be a bit of a culture shock. With a huge array of strange and bizarre characters which could have only been dreamed up by people who were drunk or experimenting with illegal substances, it is not surprising that adults find it hard to understand the younger generation. Still, I'm not complaining, as these cartoons are miles more fun than some of the dreary material we were all brought up on.

But along with these mad cap antics comes responsibility and education. The creators deserve a pat on the back for the Case of the SpongeBob and Saving the Surf featurettes which, as well as proving that the characters of Bikini Bottom are actually based on real life sea creatures, they also look at the various pollution problems and encourage the children to keep the oceans clean. It's just a pity they don't educate the adults instead.

As with The Simpsons, there's plenty of in jokes to keep the parents or those more mature fans amused whilst there's plenty of child friendly entertainment and laughs to keep the youngsters happy. I'm sure this disc will be appearing in many a child filled household and, given it's rather successful run in the cinema and sell thru' market, I'm sure it will only be a matter of time before a second full length feature appears from that strange, but wonderfully titled, place known as Bikini Bottom. It's mad and completely pointless, but it's one heck of a good laugh.