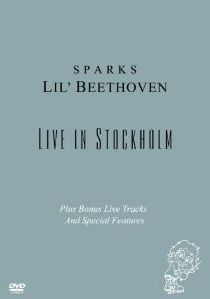 ReviewMusic
Review Article Go back to homepage
Live performance of their 'Lil' Beethoven' release with additional live tracks.
Ron and Russel Mael
Music
All
1 Hour 37 Minutes
Thank you for supporting DVD365.net when you order using the link(s) below.
Buy DVD
Story

Formed in the early 70s by the Brothers Ron and Russel Mael, Sparks had a run of top 30 hits in the British charts starting with This town Ain't Big Enough For the Both Of Us reaching number 2 in May 1974. Those of you Thirtysomethings who as kids watched Top Of The Pops on a Thursday night may recall seeing a band with the androgynous singer with a distinctive voice (Russell), but will most likely remember the odd/scary looking skinny bloke on keyboards with his constant scowling and Hitler moustache (Ron), well that was Sparks.

This live DVD showcases their 2002 release Lil' Beethoven filmed at the Sodra Teatern in Stockholm, Sweden in March this year. There are also 13 Bonus Live Tracks picked from what now must be a vast back catalogue.

The overall coverage of the concert is very good with regular focusing on the individual band members, without resorting to fancy cuts and visual effects. Ron and Russell are flanked by Tammy Glover on Drums and Percussion and ex Faith No more Guitarist Dean Manta on Guitar, both add backing vocals to their respective duties.

Due to the nature of a live performance, it is going to be a dark affair. Mix that with bright lights and dry ice (a staple ingredient of any live performance) and this can be a recipe for disaster, however, the picture transfer is excellent with only the usual problems presented by concert lighting arrangements. There is a small amount of grain and digital artifacting present, but this tended to be a consequence of the dry ice floating around the stage area, whilst the heavy use of red and white in the stage lighting also caused the occasional problem with over saturation and outlining.

The 448 Kbps 5.1 soundtrack is certainly much better than the default standard 448 Kbps 2.0 stereo track and offers some impressive channel separation along with a good balance between the front and rear channels. The surround channels are also used to good effect and are not just the usual stale reproduction of the front channels. Although it is not a true reflection of a small concert environment, with heavy post production sound processing evident, the subtle additions of certain keyboard instruments plus the enthusiastic applause of the audience really does add to the overall ambience.

Even the synthesizer and bass heavy tracks manage to make a welcome presence in the LFE channel and the sound can be further enhanced by using the DSP processing effects on your surround sound amplifier (with the Yamaha Concert Hall mode being particularly impressive). However, one annoying feature worth noting is that the disc defaults to the 2.0 stereo track, you have to manually select the 5.1 format from the Audio Setup Menu option before you begin. Make sure you do, otherwise you'll miss out on a cracking sounding concert.

The menu is animated and scored but the choice of colours can result in it being quite hard to identify which menu option is actually selected. Extras wise, there's plenty of facts and interviews to keep the fans happy with a narration of the Legend Of Lil' Beethoven, a peek backstage to see the band in their dressing room (with more Mael Humour) and witnessing the band at a sound check.

Things are polished off with a number of interviews with fans on the night of the concert plus a biography of the group along with Discographies for their Single and Album releases. This last one I felt would have been better scored, while you read and advance through the pages. This is not unique to this title I know, but having been through it I feel some music would add to the viewers enjoyment.

I am not a fan of Sparks and before reviewing this disc I could only tell you the name of 3 Sparks songs (2 of which are in the Live Bonus Tracks section). Fans familiar with Lil' Beethoven will no doubt appreciate the live performance, but I could not get into it at all. The songs seemed to lack any melody or recognisable tune and instead they were just a repetition of phrases. All a bit too arty and minimalist for me. The second half of their performance was in stark contrast to the first half of the show, with loads of gutsy upbeat numbers. By the time it reaches the cracking finale performance of Amateur Hour I was really enjoying it and would have welcomed more of the same.

Having never seen Ron smile in all the TV appearances I had seen, I was shocked to see him actually smile (more than once) and shock horror he dances too! They are not above self parody either, evident on Ugly Guys With Beautiful Girls, where Ron is walking around the stage arm in arm with a very tall, long haired, beautiful brunette girl. They clearly love the live performance and it shows (Okay maybe not so much with Ron), especially on the latter half of the live tracks. Those of you with eagle eyes will spot Rons unique brand of Keyboard that is very similar to a well known brand.

I think fans will welcome this DVD as it is a well captured live performance, although I think the initial price is a bit high for a single disc release. However, shop around on-line and you'll quickly find prices much less than the RRP. Personal dislikes apart, this is a very well put together title and a fine example of how and what to release to fans. More please!