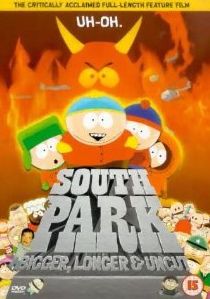 When the gang sneak into a restricted film to see their favourite television characters, Terrance and Philip, in their new film 'Asses of fire' they emerge with their minds totally warped. South Park is soon full of disobedient children using expletives in every sentence. Horrified, the parents attempt to get to the route of the problem and discover that the Canadian film is responsible.

Their only solution is to kidnap the actors with which Canada responds to by bombing the Baldwin residence. The Americans have no other choice but the declare war on Canada and execute Terrance and Philip for their war crimes. However, for the devil, and his sidekick Saddam, this is the opportunity they have been waiting for...

The picture quality is quite exceptional and far better than what I was expecting. It is sharp and bright with no artifacting and uses only an average bit rate. The use of the surround channels is also pleasantly surprising with numerous characters knocking on doors which had me turning around to see who was at the door.

Even the music manages to creep to the rears. Superb! When someone told me that this film was essentially a musical I tended to back-off this disc, however, it is not as bad as it sounds. When the various characters burst in to song it had me laughing my head off with lyrics that only South Park could get away with.

All the characters from the TV show are in the movie, plus a few extras. The film is as funny as the TV series, in particular the exchanges in bed between Satan and Saddam Hussein, and Bill Gates finally gets his comeuppance. The movie is self contained enough so that if you haven't seen the TV show before you won't be completely lost watching it.

If you have seen the TV show then you will enjoy it that little bit more. The extra budget given to this production is quickly obvious. Although the characters still have their loveable design and motion, including a nice reference to poor animation, the scene where Kenny descends into hell is quite remarkable with plenty of CGI.

Just how this film only received a 15 certificate is beyond me. Ok, there's no wild sex or horrendous violence, but it has so many expletives that even I was shocked. The first five minutes of the film must contain nearly a hundred uses of the 'f' word and they aren't bleeped out as in the television episodes. Obviously, this is not a film for children and if you are easily offended by race, sex and religion issues then you should definitely avoid, however, if you aren't then it is a scream. Go buy it.