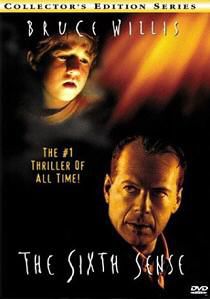 Crowe is a distinguished child psychologist haunted by a painful memory of a disturbed child he couldn't help. When he meets the eight year old Cole with a similar condition he sets out to redeem himself by doing everything he can to help. The film revolves around his attempts to help Cole come to terms with what he perceives as being a disorder, but turns out to be a very real "gift". Cole can see ghosts and as he puts it "they don't know they're dead" and it has caused him to become withdrawn and anti-social.

The film starts with the impression of being a horror film and you are waiting to be shocked-a-plenty, but it descends into a spooky psychological drama. Never the less, it is still a very, very effective film which made a huge heap of money on a small budget. I really can't say any more without spoiling the plot, but if you don't already know anything about this film then you must have been on Mars for the past year.

I actually found this film scarier than The Blair Witch Project which was around in the UK cinema's at about the same time, it has a spooky nature which does just enough to send a shiver down your spine. There is a scene where Cole goes to the toilet in the night and a ghostly figure goes past the door (an excellent piece of filming), even after repeat viewing it still makes me jump.

The acting of Osment is amazing considering his age. When a scared Cole first whispers to Crowe "I see dead people" it raises the hairs on the back of your neck. How he missed out at the Oscars astounds me. It is especially amazing to hear him talk about the film itself, he sounds like someone 5 times his age! Willis also shines in this film, he has been called the best actor of his generation, and although I wouldn't go as far as to say this myself, its certainly a fine performance from him.

Now to throw cold water onto the hot coals....The region one picture quality is very average, with a surprisingly low bit rate for such a high profile film, its especially noticeable in dark scenes where a slight graininess is apparent. The region two version redeems this somewhat with an above average bit rate and crisp and clear image throughout. However, the darker scenes on the region two disc do occasionally suffer from the same graininess seen on the region one version.

Paul thought that the region one sound was only average and muffled, okay so the film is heavily dialogue based, but I felt that the region two editions sound was excellent with no bleeding from the centre channel. When the orchestral effects were used they were very effective indeed adding to the creepiness of the film. Perhaps this is just a difference of opinions.

However, there is one infuriating item on the region one disc. On inserting the disc it starts with a set of Trailers and you have to skip them using the forward chapter key, you can't just press the menu button. Yet again the region two edition suffers by having extras removed and a beautifully animated menu made static. Although the region two edition looses a short film made by the director as a child, there are still plenty of extras in both editions to make this a must for anyone's collection and the more times you watch it, the more times the ending becomes more and more obvious. Admit it, you never saw it coming!

Similar to other head to head conclusions, it is difficult not to recommend the region two edition. Ok, some of the extras have been lost on the region two edition, but it is the fact that the disc was out so soon after the cinema release and there are still plenty of extras that make it a must own disc. I just found it a little bizarre that it had an Italian audio track instead of the French.