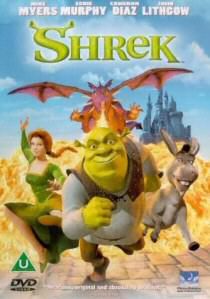 In a land of fairy tales Lord Farquaad is fed up of dwarfs, Pinocchio's, talking donkeys and various other fairy tale creatures spoiling his utopian plan. He decides to round up all of these characters and ship them out of his land. Unfortunately, for a grumpy and solitary ogre called Shrek, they are deported to his swamp.

However, Farquaads paradise is incomplete without a princess. He decides to send his best knights to rescue a beautiful and enchanted Princess called Fiona from a castle guarded by a dragon. Unfortunately for Shrek, he ends up being that knight so, along with a recently acquired friend, they head off into the unknown

With the dragon defeated and the princess rescued, Shrek finds himself falling for the princess, but why would a beautiful princess like an ugly ogre? However, unaware to Lord Farquaad, Princess Fiona has a hidden secret that only comes out a night. During their journey back to Farquaad Fiona does her best to hide her terrible secret, but one member of the rescue party discovers her secret...

The picture is absolutely flawless and is totally gob smacking in its breathtaking clarity and detail. Naturally, with this direct digital transfer, the bit rate remains high throughout and there's certainly no pixelisation. Another bonus of the digital domain is that there won't be any dust scratches or other picture imperfections than can blight standard films. You even have a choice in which version of the film to watch with the first disc containing the full framed edition and the second the widescreen.

Just how good can computer animation get? If you were impressed with Toy Story then you are going to be amazed with Shrek. Some of the animation is so realistic that you have to keep reminding yourself that you're watching animation, and animation created within a computer. Pixar, and Disney, really do have some competition and DreamWorks have come on leaps and bounds after their initial computer animated film Antz.

Although the picture is perfect, the sound can be a little lacking. There is little to differentiate the DTS and Dolby Digital soundtracks, but I felt that the dialogue level in the centre channel was too low and once the musical score or sound effects kicked in the room shook and the remote control had to be dived for. The use of the surround channels is also rather restrained and they only tend to be used by the ambient effects.

The film was obviously created with the DVD in mind as the menus are brilliantly animated and scored. Whenever you select any of the many submenus one of the many films characters bursts into life and leaps across the screen. It must be one of the best menu systems available on DVD today.

There's plenty of useful and interesting extras, although the games and activities are a little useless and may only interest the younger members of the family. The filmmakers commentary and 'making of' featurette are interesting enough and the karaoke section, especially created for the DVD, is rather amusing. There's also an interesting 'Revoice' studio for people owners of DVD-ROMs. All in all its a bumper package of extras worth the price of the disc alone.

This film is surely the benchmark for all computer animated films to be compared and must be contender for the DVD of the year. You really do need to add film to your collection, and although the region two edition doesn't carry the DTS soundtrack and the second disc of extras, it doesn't matter which disc you choose. Just make sure you buy one.