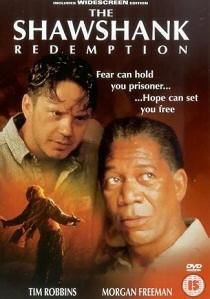 ReviewThrillerMorgan Freeman
Review Article Go back to homepage
Andy Dufresne is a young and successful banker whose life drastically changes when he is sentenced to life imprisonment at Shawshank prison for the murder of his wife and her lover.
Tim Robbins, Morgan Freeman, Bob Gunton, William Sadler, Clancy Brown, Gil Bellows, Mark Rolston, James Whitmore
Suspense/Thriller
2
2 Hours 15 Minutes
Thank you for supporting DVD365.net when you order using the link(s) below.
Buy DVD
Story

Andrew Dufresne is a clean living banker who is charged with the double murder of his wife and her lover. Although he denies the murders he is convicted and sentenced to serve two life sentences back to back at the Shawshank prison.

Once there he discovers the brutality of prison but soon meets "Red", a convict who can get anything from the outside. Red first saw Andy as he was being led into the prison and predicted that he won't last long inside the high prison walls. However, he is surprised with his resilience and they soon become the best of friends in a friendship which will last for years.

With Andy's background in banking he is soon used by the prison guards to handle their tax returns. The warden notices how good he is at his job and soon gets him involved in handling the prisons books. Andy soon realises that the warden is skimming off proceeds from the prison community projects for his retirement and Andy ends up being deep in the scheme. When Andy receives information which could help in an appeal the warden soon puts a stop to his plans leaving him with no alternative but to escape.

The picture transfer is good with an average bit-rate throughout the film, although at times the picture could be a little grainy. The night time and dark interior scenes are handled superbly and the colours are impressively pale giving the film the required post war look. I'm not sure whether there was a problem with this disc, but on a few occasions there were serious picture dropouts.

I expect that the soundtrack would have truly benefited from the new re-mastered 5.1 mix, but this pro-logic mix is handled well enough with the dialogue well defined with the minimum of surround effects. I'm sure that the musical score and day to day sounds of the prison would have been excellent in the 5.1 mix.

Steven King's mind is not a warped as we'd all thought as he has managed to produce a story without anything supernatural or evil lurking under the floorboards. It may be over two hours long but you'll find that the time just hurtles by as you are end up so engrossed in the film. It is certainly better than his other prison epic The Green Mile and the twists in the plot, especially the final half hour of the film, are truly brilliant.

The acting from Tim Robbins and Morgan Freeman are just dazzling and this film must be their best performances to date. Freeman also provides a brilliant voice-over during certain sections of the film. The support cast is just as good and you can easily see why the film was nominated for seven Academy Awards including best picture, actor and screenplay.

The disc reviewed here is the Dutch region two edition. There were no extras to speak of and the static menus were all in Dutch, which can be forgiven since it is a Dutch disc!