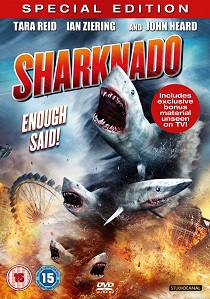 When a freak tornado swamps Los Angeles, with a record-breaking pod of 20,000 sharks is passing through the waters, thousands of the man-eating sharks are sucked into the swirling vortex, terrorising the waterlogged populace and flooding the city with shark-infested seawater. No place is safe - with swimming pools, lakes and drains teeming with the deadly, and hungry for humans, fish.

With the storm bearing down on the city, Surfer and bar-owner Fin sets out with his friends Baz and Nova to rescue his estranged wife April and teenage daughter Claudia from the sharks raining down from the skies. With nature's deadliest killer ruling sea, land, and air, they soon realise that the best chance they have to survive the deadly shark-infested maelstrom is to find a way to destroy it themselves.

And their amazing plan to save themselves and the city? Armed with an assorted array of weapons - from shot guns, chainsaws to hedge clippers - the group plan to use a helicopter, fly towards the tornado and launch home-made bombs directly into the tornado's vortex in the hope they'll disrupt it enough for it to collapse and rebalance the surrounding air. Oh, and they need to avoid the occasional outbreak of (shark) showers. That sounds like a good plan to me!

The image quality can only be described as television material - which, considering it's a made for television production, it's not far off the mark. Whilst the transfer is clean and free from artifacting, with an above average bit-rate throughout, it does suffer from all manner of issues - but that's not the fault of the DVD encoding technology, rather the dodgy cinematography, poor stock material and even worse special effects which look so obvious that they could have been rendered on a home computer, tablet computer - or washing machine.

The film is accompanied by a Dolby Digital 5.1 448Kbps soundtrack along with a simpler 224Kbps Dolby Digital 2.0 soundtrack - not that there's much difference to be had between the two. Whichever track you choose, the dialogue is easily drowned out by the loud musical score and various sound effects and, if things weren't already confusing enough, you have to rewind and try and pick out the dialogue again. It's not a good thing to have to keep doing.

Whilst the menu is pretty simple affair (looking like someone has knocked it together on their home computer), it is at least animated and scored with a rather grungy sounding tune with lyrics which are just about as funny as the film itself. In fact, somebody mentioned to me that the tune was probably the best part of the film!

Extras wise, there's a reasonable amount on offer, although it doesn't really add much value to the disc. Still, at least the production team behind the disc have made an effort with their (likely) next to nothing budget. After all, it could have simply been a vanilla affair - although, given film's following and "cult" status, it would have been a rather poor show if nothing was offered.

First off is the ten minute minute Behind the Scenes Featurette. In it we are treated to interviews with the cast (who go over the top in the usual manner) and the special effects crew who provide us with a few interesting insights at the shark props used in the film. It's all taken very seriously.

Next up is the five minute Gag Reel which is made up numerous unfunny scenes (mainly of Cassie Scerbo trying to load a shotgun), although John Heard's attempts at trying not to swear raised a slight chuckle (I guess those profanities could have been directed at his agent!). Things are rounded off with the Theatrical Trailer. Unfortunately, there's no sign of any subtitles for the hard of hearing.

Sharknado is not a theatrical release but, with a relatively small budget of $1 million dollars, a B-movie commissioned by the American Syfy channel. And by B-movie, I assume they mean "B" for "bad", because Sharknado is bad. Terribly bad. But it is because of this that the film has become so popular.

In our modern age of instant messaging and up to the minute news, this incomprehensible popularity all thanks to a service that entertainment businesses have become to rely on - and take advantage of. That service is social media and, in this instance, Twitter. After the SyFy premiere in America, despite below average audiences, Sharknado went viral and the popularity of the film went exponential – setting a record for most watched original film repeat showing in Syfy history in the process. It has even managed to get a limited theatrical screening and, naturally, it soon found its way across the "pond". So, after a screening on SyFy in the UK - generating even more publicity - we now find ourselves with a DVD and Blu-ray release.

So why is Sharknado so inexplicitly popular? Surely it can't be that bad...? Can it?

Then there's the continuity which is so poor I can only think it was deliberate. For example, we cut to a scene on the ocean and to a fishing trawler. We head on board for some poorly acted dialogue only to find we're now on a yacht! Next up, the storm is coming and the waves are crashing in - much to the enjoyment of the surfers - except when we switch to some close-ups of our "heroes" the sea is flatter than a mill pond. Then there's the inexplicable lack of rain (and standing water) and the supposedly flooded streets, and yet when we're in Fin's car, the rain is lashing the windows and sharks are swimming under the car (a car which is an SUV - not a forty foot monster truck!). I could go on, but my keyboard would probably expire from the manic typing...

And there you have all of the reasons behind the Twitter chatter - Sharknado is simply so bad that you can't draw your eyes away from the screen. Do so and you'll either miss special effects so dodgy it would make a 3 year old's playtime look like Oscar winning material, continuity so bad that it looks like a production from a secondary school's drama department and acting so bad you're left wondering where the production team got the actors from (and just how bad are things for Tara Reid for her to appear in this?!). It goes without saying that your forehead will be very sore from all the times you slap it during the film.

But is it entertaining? Well, yes. And no. It's entertaining by the fact you end up shouting at the television and enjoying spotting the vast number of continuity errors (it could even evolve into some sort of drinking game - although you'd probably be in coma by the end of the film). But as a film, and concept, it's pretty dreadful. The plot holes (again, could be worthy of another drinking game - assuming you're still awake!) made Sharknado completely ridiculous.

But, there hangs the impossibly long thread. It's a film that's so outrageous it really needs to be seen to be believed. It's just a question as to whether you'd buy yourself a copy - and then punish yourself further with repeat viewings. Still, if you can't bring yourself to own a copy (and have the dubious pleasure of owning an obvious "cult" favourite), it's certainly worthy of a curious rental.

And finally, with the tills ringing all over the world, the production team would be mad to not to think the unthinkable. Yes, prepare to batten down the hatches and seek safety from the storm - there's a sequel on the way. That Swiss cheese factory is going to be working overtime...