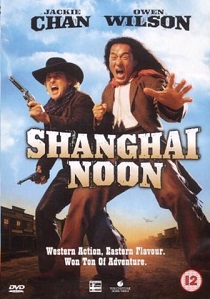 Chon Wang is a clumsy but likeable guard at the imperial palace in the Forbidden City in China. When Princess Pei Pei is kidnapped by one of her tutors, and held to ransom in America, Chon feels responsible for her kidnapping and travels with the group chosen to retrieve the Princess.

Whilst the group are travelling on a train in the wild west it is held up by a group of incompetent outlaws and in the scuffle he becomes separated from the main group. Left to fend for himself he soon finds himself fighting a group of "Crow" Indians and rescuing an Indian chiefs son. When the chief learns of the "Man who fights in dress" bravery Chon finds himself married to the chiefs beautiful daughter "Falling Leaves" and under her protection.

Continuing his journey to find the Princess he reluctantly teams up with Roy O'Bannon, the same bandit who attempted to rob the train. However the mismatched duo soon bond and continue the search for the Princess whilst avoiding the posse sent by the kidnapper, keeping "Falling Leaves" on her toes as the pair blunder from one mishap to the next.

The picture is surprisingly good. I had forgotten that it was a Hollywood production and not a smaller budget Hong Kong film. The colours are rich and vibrant with plenty of detail which really makes the scenery and the costumes of the old west come to life. The bit-rate remains above average throughout the film and it doesn't suffer from any signs of artifacting or outlining.

The sound is as equally impressive with clear and precise dialogue in the front and centre channels. The surround channels are also not forgotten with plenty of ambient and musical effects find their way to the rear of the soundstage.

The extras are interesting enough but they are presented on a boring static and silent menu. The audio commentary is disappointing short on comments from Jackie Chan. Although Owen Wilson was in the studio with Tom Dey during the recording of the commentary, Jackie Chan was elsewhere filming and his comments were added at a later date. Unfortunately the editor failed to get the volume correct and when Jackie does say something it nearly blows your speakers up.

There are a number of Deleted Scenes which, yet again, I would have liked to have seen restored to the film and have been allowed to view either the original or restored version. The Featurettes are interesting and even include a section on exploding a train which was actually cut from the film and can only be viewed as a deleted scene. I bet they were miffed when all their hard work was cut from the film!

Yet again Jackie Chan makes a successful mark in Hollywood and there's no doubting that his slap stick fight scenes and comedy really do bring the martial arts to a wider audience. Purists may complain that it detracts from a true Hong Kong action film, but it still continues with the standard zero plot and lots of action. Believe me, you won't be disappointed and if you liked Rush Hour then you're going to love this! Look out for the outtakes at the end of the film