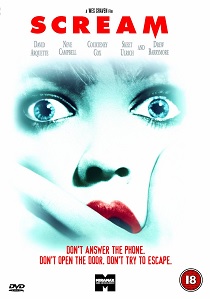 Sidney Prescott is next on the murderers list, but she isn't going to just lie back and be killed...And so she decides to fight back along with her friends and the almost useless Deputy Dewey.

This film redefined the horror genre, with Wes Craven at his nightmarish best. The film received some fantastic reviews when it was released and rightly so. Not only is it a clever film with a great twist at the end, but its humorous as well, and seems able to laugh at itself without losing any of the intensity lovingly put in by the great cast and Craven. Its just a shame that Drew Barrymore isn't in the film for longer....my hasn't she grown since E.T. - The Extra Terrestrial !

Unfortunately, although the film is great, the picture and sound on this DVD are not. The picture is at times very average which belies its slightly higher than average bit rate, dark scenes are poor and artifacting is present almost from the start in the black areas around the Dimension logo.

Sound is also poor with an unbelievable under use of the surround channels for a film in this day and age. Even the dialogue escapes a decent transfer, which is unforgivable for any film no matter what its age.

Just to top things off, Miramax have compounded this awful transfer by adding absolutely no extras whatsoever. Even production notes would have been nice and not exactly difficult or expensive to add. So, sadly, a bad transfer of a fantastic film, buy the VHS version instead.