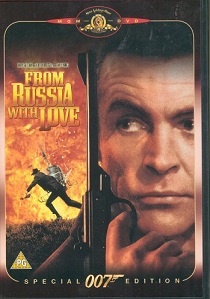 Still reeling from the loss of one of their best men, Dr. No, SPECTRE set a cunning plot in action to pit the British agent against the Russians. They plan to fake a Russian defection to the west and retrieve a cypher machine known as the Lektor for themselves and eliminating Bond in the process.

Naturally, they pick Bonds weakness for women and dupe one of the most beautiful women in the Russian consult in Istanbul to contact James and notify him of her wish to defect. Bond is astute enough to be suspicious of the operation and he begins to realise that he's being lured into a trap.

At the time of the films release the Americans were at odds with the Russians over a certain incident in Cuba. This film made the agents of SPECTRE the villains, and for a change not the Russians. They are still involved in the film, but they are just as much in the dark as the British. The film basically boils down to a 'sting' operation in order to get someone else to do the dirty work.

Although the film is nearly forty years old the picture quality is still bright and sharp with an above average bit-rate, although it does tend to suffer from whiskers. It also suffers from the loss of colour definition, but for a film of this age it is excusable and it is certainly an improvement on the previous disc in the collection. The sound is still in mono, we won't get stereo for another twenty years, but the dialogue is clear enough.

MGM must have huge cavernous stores of Bond information and paraphernalia as yet again they come up trumps with another set of extras to please the Bond fanatics. There are a number of laughable television and radio adverts of the era and a reasonable audio commentary. However, this doesn't seem to have much baring on what is actually happening on screen.