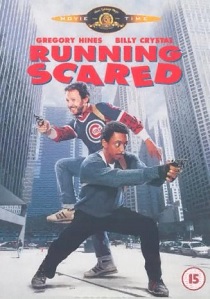 Danny and Ray are two street wise cops in Chicago who are dealing with the ever increasing problems of drugs on the street. When they spot Snake, a local hoodlum on their patch, getting out of a expensive car they suspect he's back on the street dealing. Dealing with Snake in their own unorthodox manner they discover he's working for Julio Gonzales, a smooth-talking drugs dealer who's planning on becoming Chicago's first Spanish Godfather.

As they try to nail Gonzales they unwittingly blow a massive undercover operation and are sent on a forced vacation to Key West. They soon discover the good life of warm weather and warmer women. When an aunt dies Danny comes into some money so he decides that he's going to retire and buy a bar in Key West with his partner. The only trouble is, they need to stay alive and finish off the case before they can draw their police pension.

For a film of this age the picture quality is surprisingly good with a clean and crisp image. Although the picture is rather washed out with high levels of contrast at times, there are only the minimum amount of picture imperfections and dust scratches. It is really good to see that some effort is being made by the distribution companies when it comes to releasing their back catalogue material.

With this film being made in the mid-eighties there is only a stereo soundtrack. Unfortunately, it all sounds rather messy with no real direction to the action or musical score. The dialogue is clear enough, but it really does suffer from a lack of surround effects, especially when the action kicks in. It all starts to sound like a Saturday afternoon film on television. As well as the English soundtrack there are German, French, Italian and Spanish soundtracks.

As this is a budget title there are no real extras of interest. Although it does come with the original trailer it is becoming to a point where, along with interactive menus, they don't count as extras. Never the less, for a budget title the overall quality of the disc is reasonable enough and there's subtitles and five audio soundtracks.

Before Lethal Weapon and the slew of copy cat buddy movies that followed there was Running Scared. Billy Crystal and Gregory Hines really do play off each other well, and there's a great number of one-liners and facial expressions that will have you cracking up. If your a fan of either actor then you should really check out this film as it's a classic and well worth the outing on DVD.