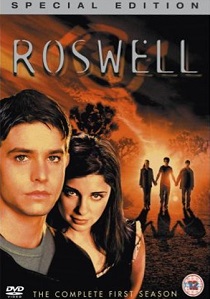 In 1947 something crashed into Roswell. And much to the annoyance of the US military, the various rumours and conspiracy theories just wouldn't go away. Was it simply a weather balloon, or was there something more mysterious and extra-terrestrial about it? One thing's for certain though, Roswell does pretty well out of the many tourists who come looking for answers and every street corner has some sort of alien themed diner or crass museum. However, the locals are totally unaware that there are indeed a group of aliens amongst them in the form of teenagers Max Evans, Isabel Evans and Michael Guerin.

Max, Isabel and Michael are the hybrid descendants of the original aliens which crash landed in the desert all those years back and after emerging from their incubation pods, looking like six year old children, they were found roaming the desert. They were taken in and eventually adopted by some of the farmers and they grew up with parents who knew nothing of their origins or supernatural gifts. It's just a pity that no one bothered to question them as to why they were out alone in the desert, where their parents were or why they were all covered in a strange goo.

But their anonymous lifestyles are about to be seriously threatened when college classmate Liz Parker gets caught in crossfire at the town's Crashdown Café. Badly wounded, and with Max having a life long crush on her, Max dashes over and uses his mysterious powers to heal her wounds. Although no one witnessed the healing act, the fact that she has a bullet hole in her dress, no sign of a wound and a strange hand print on her stomach, questions are soon asked about the identity of her rescuer, and none more so than from the local Sheriff and the FBI.

Although Max asked Liz not to talk about what happened, Liz can't help but tell her best friend Maria and their childhood buddy Alex. As Liz and Max become more than just friends, the aliens new human friends are thrust into the forefront of protecting their new friends and questioning everyone's intentions. They must all survive in a town obsessed with finding and experimenting on an alien life form whilst Sheriff Jim Valenti continues with his investigations into the incident whilst harbouring deep suspicions about Max's true identity.

There are four episodes per disc, giving a running time of approximately 3 hours. The episodes in the season one box-set are as follows:-

As with most television series on DVD the picture can be best described as merely average. Although the picture offers a good level of detail with no apparent problems with either artifacting or outlining, during some of the many darker scenes it can become rather grainy. It can also only manage an average bit rate, although the reasonable running time per disc and the inclusion of subtitles and additional soundtracks may have required this for space purposes. It's also yet another American NTSC to PAL transfer which over saturates the colours, especially the reds and flesh tones, which results in things becoming a little messy at times. It's not the best picture out there, but neither is it the worst.

But if there's something that will bring a television series straight back down to earth (no pun intended) it would have to be the soundtrack. And like most other television series on DVD, Roswell is nothing special. Still, the 448Kbps Dolby Digital 5.1 soundtrack is reasonable enough for the subject matter with clear and precise dialogue and the occasional use of the surround channels. There is also the intermittent use of a musical score, usually some grungy rock track, but this doesn't really seem to have any real sense of direction and it is just mixed in with the rest of the dialogue.

Never the less, the future is looking bright for the humble television series and the use Dolby Digital. Whilst only a fool would expect an American television company to produce a dynamic 5.1 soundtrack just for export, with the massive success of 24 on DVD and the increased availability of digital satellite channels in America, it can only be a matter of time before a fully blown 5.1 soundtrack becomes the norm for a television series.

The menu introductions on each disc are nicely animated with cut scenes from the series blending nicely into the background. However, once that is over the menus become static with only the episodes, and any optional items related to the episode selectable. It's certainly in keeping with the majority of television series released by Fox on DVD and it more than serves it purpose.

It is it currently rather difficult to pass any opinions on the extras, namely because I haven't seen them. The set of preview discs I received were unfortunately lacking the all important sixth disc which contains a making-of, behind the scenes documentaries, actors auditions, a music video, and more annoyingly, the season finale. Hopefully I will be sent it at some point and will endeavour to update this review. However, a few of the episodes do include Audio Commentaries so at least I can comment on those. Alas, they are nothing that special and are presented in a rather boring and monotonous tone and soon loose their interest. Jason Katims and David Butter just prattle on about the series and hardly ever mention anything about what is happening on screen.

Twentieth Century Fox seem to have the knack of producing some of the best television series. With the likes of The X-Files, Buffy the Vampire Slayer, The Simpsons and Futurama to name but a few, they have a fine pedigree of programmes to showcase on DVD. And after many howls of protest from the followers of the various shows the trickle of television DVD box-sets has become a welcome flood, and the price has become far more attractive as extras and widescreen presentations become the norm.

And the latest one to be added to that esteemed box-set collection is Roswell, a bizarre cross between The X-Files (David Butter was also co-producer of the series) and Dawson's Creek. On one hand you have extra-terrestrial's trying to avoid the attentions of the FBI, whilst on the other you have all of the problems associated with teenagers growing up. It's a strange mix, but it's a mix that works remarkably well. If teen soap fans can put the science fiction references aside whilst science fiction fans ignore some of the laugh out loud cheesy dialogue, there's still plenty of conspiracy theories, drama and relationship issues to keep the pot of interest bubbling.

But to be brutally honest, the first season is the best before the writers seemingly lost interest in the project. In the later seasons the plot line becomes totally disoriented and eventually disappears up it's own backside. So it's best to get onboard now and enjoy the ride whilst you can. And at a reasonable price for a comprehensive six disc set it's not going to break the bank.