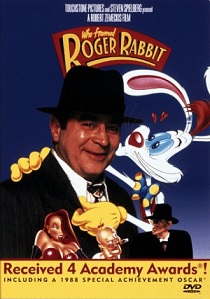 Eddie Valiant is a private eye who's been spending most of the day with his "friend" Jack Daniels since the death of his brother. Eddie use to be the toast of toon town, the bizarre residence of the cartoon stars, as he helped them stay on the right side of the law. However, one day that all changed when his brother was the recipient of a safe on the head.

When Toon star Roger Rabbit suspects his wife Jessica is playing "pattycake" with someone else, the cartoon studio hires detective Eddie to follow her resulting in him producing some damning photographs of her with Acme cartoons owner Marvin Acme. Unable to accept what he sees, Roger disappears into the night and when Marvin Acme is found dead Roger becomes the prime suspect.

When Roger turns up at Eddies office he manages to convince him that he didn't commit the murder. Eddie becomes interested in the fact that Marvin Acme had promised to leave toon town the residents and with the will missing toon town is not safe from a mysterious developer buying up property in the area. However, Judge Doom is on the case and he's determined to dish out his brand of justice - a nice soothing dunk in his toon killing dip.

The picture is rather poor and, although it has a reasonable bit-rate throughout, suffers from a disappointingly grainy picture. However, there's no artifacting or outlining but the state of the picture raises the question of its source. Given that a laserdisc was available a few years back one has to assume that the grainy material originated from this source.

The sound is hardly anything special either. The dialogue is reasonably clear in the centre channel, but the rest in very disappointing. For the cartoon character style of the film, with plenty of whizzes and crashes, there's hardly any use of the surround channels. I had to keep checking my system to make sure everything was turned on.

With this being an early entry to the DVD market the extras are far and few between. Its a great pity that the menus couldn't be animated and, unlike the Laserdisc version, have the additional Roger Rabbit short cartoons added to this disc.

Hardly any effort has been put into producing this disc on what is a ground breaking, as well as award winning, film. With a poor transfer and no extras it seems like yet another disc created as a money making exercise. Ok, so its an early disc into the market, but that should not be taken as an excuse to rip off the buying public. Let's just hope that a special edition is released at some point in the future.

Special Features
Related Articles
Paranormal: White Noise, Cold Moon, Going In Style, I Am Not A Serial Killer, Piranha 3D, Back to the Future Trilogy
Mona Lisa, Super Mario Bros: The Motion Picture, Outside Bet, Will, Brazil, Mussolini And I, Outlaw, The Wind in the Willows, Hollywoodland, Enemy at the Gates, Outlaw, Unleashed, Vanity Fair, The Wind in the Willows
The Night Child, The Human Contract
Comments
RecommendedView