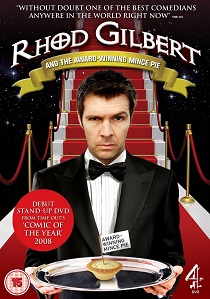 ReviewTV SeriesStandup ComedyComedy
Review Article Go back to homepage
The multi-award-winning Welsh wonder and star of the Royal Variety Performance, Rhod Gilbert, is back with his hilarious and critically acclaimed show.
Rhod Gilbert, The Audience
Stand-up Comedy, Comedy, Television
2
1 Hour 14 Minutes
Thank you for supporting DVD365.net when you order using the link(s) below.
Buy DVD
Story

Since his Perrier Newcomer-nominated debut show - Rhod Gilbert's 1984, Rhod has been haunted by critics describing him as a 'serial fantasist of ex-prime ministerial proportions'. So Rhod decided to abandon his fictional tales of Llanbobl, and try living in the real world for once in his latest stand-up tour for which he received a nomination for the highly coveted 'best comedy show' award in Edinburgh 2008. So, with a Christmas nearly always around the corner, it makes perfect sense for him to join the legions of other comedians by releasing a DVD to tap into a nice revenue stream.

Rhod has won a host of awards including; a Chortle Award for Comics Comic and Best Headliner in 2009 and a Time Out magazine Award for Comic of the Year and Best Show of the Year in 2008. He was also a Breakthrough Act nominee at the Times / Southbank Awards in 2008, a Chortle Awards nominee for Best Full Show in 2009 and Best Headliner in 2008. And was nominated for the Best Radio Personality at the Celtic Media Awards in 2008. He's also fairly well known for his television and cinema adverts for the Welsh Tourist board too (I guess his Welsh accent comes in pretty handy for that too!)

But down to comedy business. Rhod's mince pie experience starts at Knutsford service station on the M6 at around 2.40am. After purchasing a Director's Chair and a Torch "with the power of a million candles", he finds himself aggressively demanding to know more about an award-winning mince pie on display in the corner of the sparsely populated restaurant.

Suddenly aware of what he is doing, Rhod is forced to acknowledge that he may be having a very mild nervous breakdown. How did it come to this? He doesn't even like mince pies. So, what better way to get over it than by telling everyone about it! Filmed in early 2009 at the Bloomsbury Theatre over two sold out dates, this DVD tells the slightly ridiculous story of how one mince pie broke the camel's back.

Given that this is a stand-up comedy gig recorded in a theatre you'd can't really set your expectations too high. There's plenty of different camera angels, with shots of the audience and various close ups of the main man, and the transfer is clean with no real signs of artifacting or grain. Whilst it's never going to look like you're sat in audience with him, there's nothing wrong image quality and it's pretty much standard material for a comedy gig DVD such as this.

The 192 Kbps Dolby Digital 2.0 soundtrack is about as good as you'll get for a stand-up concert. Rhod can have quite a strong Welsh accent at times (thankfully there's some subtitles should you ever need them!) and it's always going to be important that the soundtrack is clear without being drowned out by the theatre environment and audience laughter. Fortunately, all is well here and there are no problems to report. All in all, it's what you expect from a stand-up DVD.

The menu is reasonably animated with a rotating menu system and scored with some manic music as featured in the tour. Needless to say, it's not as elaborate as Ross Noble's rather over the top efforts but, then again, you're not really going to doing much other than watching and enjoying the show. Extras wise, there's not really a huge amount on offer although, what is available, is more than likely to satisfy his many fans.

First up is the seventeen Back to Llanbobl featurette. In it, Rhod simply walks around a Welsh village and reminisces about growing up there - even getting some assistance from the camera crew to help him re-enact some of his childhood games. Naturally, there are plenty of daft observations (and planted actors to interact with him) but keep an eye out for the rather impressive Llanbobl Castle. Next up are ten minutes worth of Outtakes. Some scenes aren't really outtakes as Rhod appears from behind the curtain and chats for a bit before telling people that they're about to start filming. Naturally, there's some heckling to be done and poor on Rhod has to put up from a fair bit from a rather drunken sounding lady (fortunately, you don't get any of this in the main show).

The final extra is his five minute Luggage sketch which is Rhod's encore which he informs the audience is going to be the DVD extra (nice one Rhod, nothing like having everything planned out to the smallest detail!). Told so many times now that it is starting to get a little unfunny, Rhod talks about an incident with a certain low cost airline and a mishap with his luggage on a trip to Ireland. All in all, not a bad set of extras, even if they leave you a little underwhelmed and unsatisfied - especially given the length of the actual stand-up show.

Although still very funny and enjoyable viewing (even if the extras are too short), I was slightly disappointed with the actual content. As a fan of stand-up comedy I enjoy Michael McIntyre's Live at the Apollo show on BBC1 (why has that never been released on DVD?). As a result of this great show (and Jack Dee's efforts before him) I've seen many stand-up comedians that I wouldn't have normally known about. One of the acts on the show was Rhod. Unfortunately, so was pretty much the same routine as seen on this DVD. Alas, it appears that poor old Rhod's material is rather limited and that makes it a little more unfunny - especially when you know what punch lines are going to be heading your way.

Never the less, you can't fault Rhod for his efforts. His observational comedy, and exasperated and quite manic outflows that leave him gasping for air, do make for some classic comedy moments. Once you've managed to explore the fairly sparse set of extras (and if you're new to his brand of comedy) you'll find a true comedy gold moment as he explains his luggage problem (or lack of it). It's just a pity that the actual main show is not longer than it is and much of the material is recycled.

As a stand-up comedy DVD you really can't go wrong. His routines are totally different to the likes of Jimmy Carr, Ross Noble or even the flavour of the moment comedian Michael McIntyre, and on that basis, if you're a fan of stand-up then you should really include this disc in your collection. Still, you may want to consider purchasing a packet of mince pies before viewing (either that or, with restricted seasons, a packet of apple pies instead).