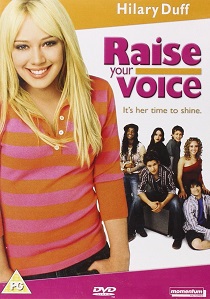 Blessed with a naturally joyful singing voice, Terri Fletcher is a 16 year old aspiring singer who has her sights set on attending the Bristol Hillman Conservatory in Los Angeles - the most celebrated summer music programme in the country. Although she has plenty of raw talent, Terri's aspirations are dashed by her overbearing father who doesn't like the idea of his beloved daughter studying in the violent city of Los Angeles. But Terri's life is thrown further into turmoil when her beloved brother Paul is killed, and Terri is seriously injured, in a car accident. But before his death Paul had secretly submitted a video of Terri that results in an offer of a place on the prestigious music programme.

A despondent Terri resigns herself to staying home for the summer, but her mother Frances and Aunt Nina have covertly devised a plan to keep her from missing out on the opportunity of a lifetime by tell Paul that she will be staying with her Aunt Nina. Upon her arrival in Los Angeles, Terri is quickly introduced to the ultra-competitive, high-stakes environment of the big city. Lacking any formal training, she struggles to make friends and to find her voice amongst the highly-gifted group of musical students.

Inspired by the mentoring of Mr. Torvald, Terri pushes herself to master the intricate musical arrangements taught in the highly advanced programme. As the students prepare for their final performance to determine the winner of the schools $10,000 academic scholarship, Terri partners with fellow student Jay resulting in a romantic bond with the rough and tumble musician. Leaving her fears and anxiety behind, Terri must learn to step into the spotlight and rediscover the artistic musical passion that burns inside of her, and all without her fathers knowledge.

The picture is bright and reasonably colourful with a good level of detail and solid black levels throughout. However, although it appears that it was a full scale theatrical release, it looks almost like the material was sourced from a television broadcast as it suffers from washed out and rather understated colours. Given that it's such a recent theatrical release the image quality can be a little disappointing with a print that suffers from numerous dust scratches and other imperfections. Fortunately, it's not all down hill as grain is kept to a minimum and there are no signs of either artifacting or outlining.

With plenty of singing to be done the Dolby Digital 384 Kbps soundtrack is adequate for its needs. The dialogue is crisp and clear in the centre and front stereo channels whilst the surround channels are put to some reasonable use with the various musical numbers and ambient effects. Still, given that it's more or less a musical it's not the best sounding film out there. However, I suspect some of this can be pinned on the relatively small scale nature of the film and it's a little unfair in trying to compare it with films such as Moulin Rouge or The Phantom of the Opera.

The menu is well laid out, with some nice transition effects between menus, but overall it's a fairly plain affair with only an occasional image change of Hilary Duff. The menu is also scored, but once the tune finishes don't expect it to restart. Extras wise, there's a fairly good collection on offer and the teenage audience which the film is squarely aimed at will certainly find something of interest, even if it's only to allow those pre-pubescent teen boys to gaze at Duff.

First off are five minutes worth of Deleted Scenes which can either be individually selected or played in one go. They are essentially extended versions of scenes already in the film and were most likely removed for pacing purposes. Although none are of any particular interest the image quality is on par with the main film and they must have only been removed fairly late on into the production process. Next up are four minutes worth of unfunny Outtakes, although the section where Rebecca De Mornay gets her scarf caught up in David Keith's shirt cuff is mildly amusing as the clips keep returning to the pair trying to untangle themselves.

The seven minute Behind the Scenes Featurette is the usual collection of back slapping comments from the cast and director. It's your typical promotional fluff with very little actual behind-the-scenes footage and simply an extension of the theatrical trailer. As a result, there is very little value to anyone interested in the actual production. The ninety second Orchestra Sequence is even more pointless with yet more clips from the film and the occasional glimpse of the orchestra providing the rather pleasant tune which I don't even remember hearing in the film (and thus showing just how much attention I was paying).

If you ever wanted any proof that Hilary Duff can indeed sing then the four minute Music Video for her tune Fly is also included. Whilst her music is not really going to appeal to the European market, it is the perfect material for the rather bland American music market. The Interactive Jam feature is a novel, but ultimately rather pointless, feature which allows you to form your own four channel sound and enjoy a jamming session. However, it's not as interactive as you think as whatever channel is chosen you are then lead down a predetermined path and ultimately a predetermined outcome and music style. Still, there's probably not too much you can do with DVD here and at least they tried. Things are rounded off with the Theatrical Trailer for the film.

It would seem rather unusual to fill a singing role with a non-singing actress. However, with me knowing nothing about Hilary Duff, it came as quite a pleasant surprise to learn that not only is she one of Hollywood's fastest rising stars, but her solo debut album has sold more than 4.8 million copies (although they were probably all in America). There's there's even the excitement of a second album on the way too. With films such as The Lizzie McGuire Movie, Agent Cody Banks and Cheaper By The Dozen already under her belt, it looks like there's another Jo-Lo in the making. However, I just wonder whether it is a music style will export out of America.

Aimed at a female, and early teenage audience, Raise Your Voice is probably not the best film for a cynical and thirty-something bloke to review. Never the less, whilst it contains the usual sugary goo that makes women want to reach for the tissues, and blokes the vomit bucket, it is a strangely alluring film not to dissimilar to Fame. Although it's so predicable, it's remains a rather inoffensive feel good factor film which the entire family can enjoy. It may not be worth a purchase but a curious rental may be of interest to some.