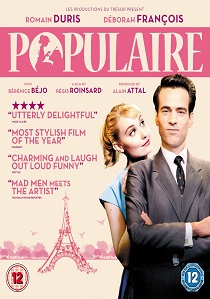 ReviewComedyRomance
Review Article Go back to homepage
Set in 1950s France, Populaire, follows 21-year-old Rose Pamphyle who yearns for more than the humdrum existence she seems destined for. But when she travels to Lisieux in Normandy in search of a job, Rose discovers a special gift - she can type at extraordinary speed and unwittingly awakens the dormant sports fan in Louis who decides to coach her and turn her into the fastest typist in the world.
Romain Duris, Déborah François, Bérénice Bejo, Shaun Benson, Miou-Miou, Frédéric Pierrot
Régis Roinsard
Comedy, Romance
B
1 Hour 51 Minutes
Thank you for supporting DVD365.net when you order using the link(s) below.
Buy BD
Story

Spring 1958. 21-year-old Rose Pamphyle is living in a sleepy French village with her grouchy widower father who runs the village store and keeps her firmly in check. Thanks to an arrangement by her father, she is Engaged to the son of the local mechanic and as she passed from the control of one man to another on her wedding day, she seems destined for the quiet, drudgery-filled life of a housewife.

But Rose wants more from life. When she travels to Lisieux in Normandy, where charismatic insurance agency boss Louis Echard is advertising for a secretary, the ensuing interview is a disaster. But Rose reveals a special gift - she can type at extraordinary speed.

Impressed by her natural abilities at the keyboard, the young woman unwittingly awakens the dormant sports fan in Louis. If she wants the job she'll have to compete in a speed typing competition. Whatever sacrifices Rose must make to reach the top, Louis declares himself her trainer. He'll turn her into the fastest girl not only in the country, but in the world! As he coaches her, they both discover that the road to success can take some romantic turns...

The colours of the 50s are wonderfully reproduced with this near pixel perfect Blu-ray with things starting off on a high with the richly coloured opening credits. The Blu-ray format is the ideal source for this type of film with a collection of fantastically rich and vibrant colours.

Deliberately washed out to give it a retro look similar to that of Mad Men, the colours have been softened with pale, and natural looking skin tones, whilst keeping red, green and blue as the dominant colours. It's really effective as the reproduction costumes and sets of the period look as if they're taken straight from stock footage or an old Hollywood film from the 50s.

With rock solid black levels throughout, and no sign of pixelisation, outlining or edge enhancement, the transfer is sumptuous and simply gorgeous in HD. If you ever needed an excuse to buy a Blu-Ray player, or pay that little bit extra over the DVD for the Blu-ray version, there's no better example than this.

The disc is accompanied by two audio tracks with DTS Master Audio 5.1 and Dolby Digital 2.0 soundtracks. Naturally, both are in their native French tongue but, don't worry, there's English subtitles too. However, if you really can't stand the subtitles you could always have a go with the Audio Descriptive soundtrack for the visually impaired. Whilst you need to put up with the scene being described, at least there's a half-hearted attempt at dubbing, even if it's pretty poor.

Audio wise, even though I can't speak (or understand) a word of French, the dialogue is crisp and clear in the centre channel whilst the front and rear channels are kept extremely busy with a huge array of ambient effects as well as having to handle the musical score too. All-in-all, it's a fantastic and hugely rewarding soundtrack.

Once you get past the trailers for Diana, Behind the Candelabra, The Impossible and Quartet, your met with a rather pleasing menu. In a similar design to the opening titles of the film, the menu is scored and wonderfully animated in the same 50s style of graphics. It's all very simple, but equally, extremely effective too.

Extras wise, there's five featurettes (in High Definition) to work through, but the biggest problem here is that they're far too short. Ranging from two to three minutes in length, the featurettes could have easily been merged into one, but there's some disc padding to be had. However, even though they're all short, we're still offered a small amount of behind the scenes footage along with a few interviews with the cast and crew.

The major disappointment is the three minute The 50s featurette which looks at the wonderful 50s design. There was so much to be had from this, but it's so brief it's hardly worthwhile watching. Again, the rather too short Typists Rule featurette is another interesting one which ends up being another missed opportunity. It ever so briefly looks at the various typewriters used in the film, how they were collected and reconditioned plus those all-important secretaries needed to actually do some typing - and speedily too.

OK, given this is a French film, you can probably excuse the French audio, but given that the film is being marketed outside of France, you would have hoped that some effort would have gone into making the extras more "international". Still, at least there's English subtitles on offer for those of us who don't speak the "lingo" - they're also available in a larger font for the visually impaired too (a simple, but extremely welcome, idea which I'd like to see appear on all releases).

I'll be the first to admit that I'm not a fan of the French. In fact, it's one of my hobbies – hating the French.

However, they do have one redeeming feature - the quality, and originality, of their films. Considering I don't speak the language, instead having to rely on the subtitles, I can count several French films in my list of all-time favourites. Covering some interesting and outlandish genres, plus some occasionally extremely silly ideas, titles such as Populaire have long been the mainstay of the French cinema industry. It's in their blood and, unlike Hollywood, they're prepared to have a bit of fun in the process.

With a varied range of titles including Riffi, Nikita, Angel-A and The City of Lost Children, it would be fair to say that the French are capable of producing some cracking titles - and Populaire can be counted amongst them. Still, given the multi-million dollar tripe that Hollywood is churning out these days, it's not going to be too hard to leap over that rather low bar - no matter which country (and language) those films originate from.

Whilst the extras do take a shine off the disc, it's such a small "complaint" that it can't really detract from what is a wonderful rom-com from the most unexpected of stables. Given that the British, and a combination of Hugh Grant and/or Colin Firth, have had romantic comedies well and truly stitched up for years, it makes a refreshing change to discover something new. Sure, it may not be to everyone's taste, but the visuals are stunning and the two lead actors are very likeable and gel extremely well.

They do say that that imitation is the sincerest form of flattery and Hollywood is always more than happy to remake popular French films and then make a complete mess of them. So, it's a given that a remake of this film won't be too far off. Hollywood should just leave them alone, try to come up with their own ideas and simply enjoy the French originals as they are - innovative and quirky. After all, only the French could make a film about typewriting.