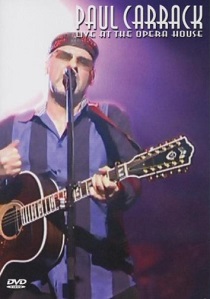 ReviewMusic
Review Article Go back to homepage
A live performance of Paul Carrack at the Opera House, Buxton.
Paul Carrack
Music
All
1 Hour 0 Minutes
Thank you for supporting DVD365.net when you order using the link(s) below.
Buy DVD
Story

From his first top 20 hit How Long, in November 1974 (it topped the American chart and was a huge hit worldwide) with group Ace, Paul Carrack laid the foundations for a very impressive musical career. He has written songs for The Eagles, Tom Jones and Diana Ross and has played keyboards with Roxy Music, The Smiths, Pretenders, Eric Clapton, BB King, Simply Red and Elton John. Amongst all that he also managed to fit in being a band member playing keyboards for Squeeze (he sang the great Tempted) and the lead singer of Mike And The Mechanics.

This live DVD highlights part of his current tour filmed at the Opera House, Buxton, Derbyshire in January this year. There are 20 tracks picked from his own back catalogue and from his time with Mike And The Mechanics plus some covers for good measure.

The coverage of the concert is good and compliments the performance of the band very well. The venue is relatively small and this makes for a more a friendly atmosphere. With the occasional introduction of some tracks beyond the basic 'This is..' he chats with the crowd and clearly loves performing live.

Although darkly lit throughout, with the much of the concert just using a single spotlight and close-up on Carrack, picture reproduction is surprisingly good. The transfer is clean whilst the picture has a good level of detail and a high bit-rate throughout. However, during some of the wider shots grain can be a bit of a problem, although this is not to be unexpected with concert lighting arrangements.

Small concert venues always have the benefit of tighter acoustics over the booming concert arenas and as a result it provides the perfect opportunity for a sound format to show off its credentials. So in what appears to be a standard feature of music concerts on DVD, both DTS and Dolby Digital soundtracks are provided.

Both soundtracks offer some very clear vocals and a good balance between the various instruments, whilst bass levels are surprisingly good. There have been the usual post production enhancements, but both tracks will bring out the best in some of the higher end audio equipment. However, one thing worth noting is that the soundtrack defaults to the Dolby 2.0 track, so if everything sounds a little flat you've probably forgotten to select a better mix.

As usual, the 768Kpbs DTS soundtrack is the far superior of the two formats with The Living Years sounding particularly powerful. Although labelled on the cover as Dolby Digital 5.1, the 448Kps track on this preview disc was actually identified as a mere 4.0 mix. This may have accounted for the DTS track winning the sound and bass battle with complete ease.

The menu is animated and scored and there is a rather nice effect when an option is selected. The extras comprise of an interview with the man himself. A Before and After Featurette which shows sound checks and the signing of merchandise post gig, along with some interviews with fans. Unfortunately for budding singers or Karaoke fans, there's no subtitle track to assist you in your sing-a-long. Fans of Paul Carrack's material will probably already know most of the lyrics, although it's still a nice to have. Another slight moan is the lack of a Biography of the mans impressive musical CV, and maybe a Discography too.

I am not a follower of Paul Carrack and before reviewing this disc I could only tell you that he is the singer of Mike And The Mechanics. I can now tell you however, that he is a great performer and this was a very enjoyable live set and must have been great to actually have been there.

Fans will welcome this DVD as it is a well captured live performance of a very talented man. If you are a fan and are unable to attend any of the live shows he has scheduled in October 2004, then this is an ideal consolation. Over the years (before the phenomenon we know as DVD) I have seen a number of bands and seeing this performance makes me wish that they had been captured as well as this if at all. Moans apart, this is a good music DVD title.