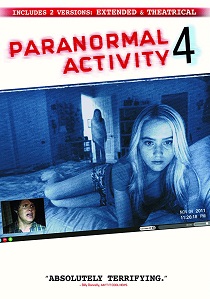 When Alex decides to show her boyfriend Ben the rather impressive tree-house used by her younger brother Wyatt they are rather startled to find their next door neighbour's child Robbie sitting there all by himself. A little puzzled as to why he's sat there, Alex decides to take Robbie back home and, although a little disturbed by the boy's rather odd behaviour – and sickly appearance – she carries on with her day not expecting to see Robbie back at the house again.

However, in the early hours of the next morning the family are awoken by a commotion across the road and an ambulance arriving outside of Robbie's house. With Robbie's mother taken to hospital, Alex is placed in the care of the family for a couple of days until his mother returns. It's not quite what Alex wanted – with the "weird" kid back in her house – but at least Wyatt is happy to have another friend to play with.

Later on in the day Alex ventures back to the tree-house and finds both Wyatt and Robbie sat there talking to Robbie's invisible friend. That evening the children decide to play on their X-Box and, whilst everyone joins in with the multi-player games, Robbie simply sits silently on the sofa. However, he's more than happy to be sat there by himself as he's playing with his invisible friend.

Deciding to liven things up a little, Ben decides to show the children how the X-Box Kinect feature works. Turning the lights off Ben shows everyone the hundreds of infra-red tracking dots used by the console to help calculate movements and determine a player's position. As Alex, Ben and Wyatt dance around in the dark, Robbie continues to remain sat on the sofa - where the camera appears to detect a small figure moving next to him. Things are starting to get a little creepy...

The next day Ben tells Alex that he's got some interesting information about Robbie. He reveals to Alex that his computer automatically records their webcam chats and, during the middle of the night, Robbie came into her room and slept next to her. Mystified by Robbie's increasingly odd behaviour, Ben offers to install, and hide, laptops around the house and record any other strange goings on. Over the next couple of days and nights, those computers begin to record stranger and stranger events around the house...

Paranormal Activity 4 is never going to win any awards for its cinematography or use of lush colours and/or detail, but that's entirely by design as it's all meant to emulate a "home video" look. With various image sources – such as a laptop camera, webcam and camera phone - there's a broad range of image quality on offer. Given this, whilst the transfer is without any damage, and the bitrate reamains above average throughout, there's plenty of deliberate background noise, washed out colours and varying degrees of high and low levels of contrast – just like your average home video really.

Whilst the night-time scenes invite a more moody and foreboding image quality with plenty of noise and grain (as expected from the "cameras" used to film the house), with the X-box camera footage being particularly interesting, the day-time scenes still manage to contain plenty of detail with rich colour and flesh tones and some solid black levels.

Given what the director is trying to portray with the various video sources, it really is a cracking effort. It also makes me believe that, no matter how video cameras develop in the future, even when Joe Public finally gets their hands onto an affordable 8K HD video camera, they'll still be churning out grainy and shaky videos by the hour load.

The 448Kbps 5.1 Dolby Digital soundtrack is a bit of a strange one really. Given the amateur style of the video footage, it's difficult to use same philosophy in the sound department too – especially when you're trying to put across the creepy nature of the film to an audience with those ever so classic horror staples - those "bumps in the night" which the film heavily relies on. Your el-cheapo webcamera is never going to provide that.

Whilst there's some good use of the LFE channel for the eerie parts of the film – usually when something is about to happen – the dialogue can be very difficult to pick up at times. I was forever having to crank up the volume to pick up conversations and then worry about some sudden noise that would be loud enough to startle next door's dog!

Extras wise, the disc offers an extended cut of the film (which runs for a further nine minutes) as well as the original theatrical cut. I'm not really sure what is so special about the extended version, but nothing really stood out to make it that much different to the standard cut. There were certainly no extra scares to be had (unless you class some dodgy Halloween costumes as scary...?)

The only other extra on the disc is the twenty-eight minutes worth of Recovered Files. This is essentially a disjointed collection of rather pointless deleted scenes – again without anything scary in them, but simply more horror movie clichés. Still, since the film was more or less improvised throughout, at least it shows some of those "creative juices" at work. Never the less, these "recovered" files offer nothing extra to the overall plot and could be easily skipped if required.

Although disc space might be an issue, I was rather surprised not to find the trailers for the other films on the disc too. Perhaps they levitated and disappeared off the disc and are set to only return somewhere in a complete boxset...

I can't help that these "lost footage" and Point of View films have run their course – it was an original idea when The Blair Witch Project used it so effectively way back in 1999, but I'm starting to get a little tired of it all. Even big budget hits such as Chronicle and, of course, Cloverfield are constantly chipping away at the appeal of it all. It's all starting to become like being subjected to watching a neighbour's holiday videos – albeit (hopefully) without some supernatural being accompanying them on their trip – not something you'd particularly like to endure.

Whilst the first Paranormal Activity film managed to scare the pants off the audience, and fill the studio coffers to a tune of $190 million dollars worldwide, I can't help but feel that the subsequent sequels are simply there as a nice little money spinner for the studio - especially since the fourth outing managed to take an equally impressive $120 million dollars worldwide. And with DVD and Blu-ray sales to come, you can be sure of the franchise continuing for a few more films yet.

Never the less, you certainly can't say that the storyline is particularly unique anymore and you do have to wonder why the local authorities haven't been alerted to the assorted nutters and hours of weird film footage that neither the owners – nor anyone else for that matter – had taken the trouble to watch during the week of clandestine filming. After all, I'm sure You've Been Framed would have been more than happy to use clips of a levitating girl...

Still, putting that criticism aside, the film has at least kept up to date with technology with the use of the creepily effective (but with an obvious outcome) Xbox Kinect, late night conversations (albeit rather tedious at times) via Skype and the ever expanding number of camera phones (which the Recovered Files feature uses extensively). At least we're not subjected to hours of grainy footage from secuity cameras.

Unfortunately, all the "shock" clichés are present and correct and you simply end up expecting them, or are actively searching them out on screen. You simply can't just sit and be scared and you're more or less one step ahead of the game as you wait for the cat to jump out from under the bed or for someone to jokingly leap out of the darkness.

But it was the persistent refusal (again, another horror movie cliché) of Alex's parents to listen to their daughter's concerns that got me annoyed the most and I had no sympathy at all for their "troubled" moments in the film. And, even with all the bedlam going on around them, why did no one simply say "will you put that @#!$ camera down!!" - but then again, I am a complete movie cynic and a tough person to please...

It was always going to be a tough act to follow the first Paranormal Activity film, but when a film fails to provide any tension or scares you do have wonder about the obvious continuation in Paranormal Activity 5. It's one for the fan of the series - or genre - only. Let's just hope they've saved the best scares until last!