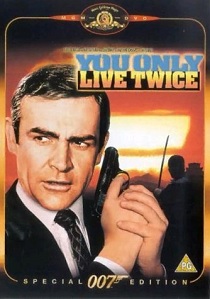 The space race is in full swing and someone is hijacking the Soviet and American space craft whilst they orbit the earth. Naturally, at this point in history relations between the two superpowers were hardly amicable and they soon resort to blaming each other.

As the threat of nuclear war hangs over the world only James Bond can save the day as British intelligence traces the unidentified rocket launches to somewhere off the Japanese coast. Bond soon discovers a massive underground base hidden in a hollowed out volcano and he must battle both against time and SPECTRE before world war III breaks out between the two superpowers.

Again MGM have outdone themselves with another superb digitally re-mastered picture. There is no artifacting or outlining and it has an above average bit-rate through the film, only the occasional dust specks and whiskers give the age of the film stock away.

However, the major disappointment with this film is the sound. It is only presented in mono. It would have really benefited from a re-mastered 5.1 soundtrack. This is especially so with this film having one of the most outrageous, and at the time the most expensive, sets with huge explosions and gun fire. I kept having to turn the volume up to hear the dialogue and then diving for the control whenever the explosions started. Shame really, but MGM have done such a good job of the bond films to date you can't really complain, although it does blot their otherwise pristine copy book.

Compared to the previous Bond discs this film has considerably less extras. However, you should not be put off by this as what we have here are still extremely interesting and informative commentaries and documentaries. Not only do you learn about the problems they had whilst filming in Japan, but the huge hangar set built in the UK actually cost more that the entire budget for the first Bond film Dr. No.

Another interesting snippet of information obtained from the documentary is that the original person to play Blofeld was replaced at the last minute with Donald Pleasence as the original actor, Jan Werich, didn't look sinister enough. They do have a point as he looked more like the original Birds-eye fish-finger man! A poor set of extras? I think not.