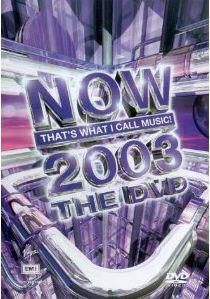 ReviewMusic
Review Article Go back to homepage
A collection of music videos from various artists of 2002
Various Artists
Music
All
1 Hour 30 Minutes
Thank you for supporting DVD365.net when you order using the link(s) below.
Buy DVD
Story

The record companies behind the ever popular "Now That's What I Call Music" have released yet another DVD containing a collection of twenty four promotional videos by various artists from throughout the year. Whilst there are other music video DVD's available they only tend to be available via subscription or are only available to companies for commercial use. Although there is an ever increasing number of music titles on DVD they only tend to be live concerts and not various artists on one collection. As a result this is a welcome release for all popular music fans.

With promotional videos being a multi-million pound industry, with some artists spending enough money to create a Hollywood blockbuster, you'll be expecting only the best in picture quality. Fortunately, all the videos here are of the highest quality with plenty of rich and vibrant colours and no signs of artifacting.

The sound is only presented in stereo but it's good enough for the subject matter, after all you only play the music on your CD player and you won't be expecting the thrills and explosions of an all action film. Perhaps in the future we'll be fortunate enough to get DVD-A releases containing the normal audio tracks as well as the promotional videos.

Although there are more videos than the previous 2001 edition the overall presentation and contents of the disc is much poorer than the last. I'm sure there were much better videos released during 2002 to make it onto this disc, especially when you consider the vast number of artists who have appeared on the four CD volumes released this year.

Even the overall packaging is poor with a definite "free with this magazine" look. EMI definitely need to pull their socks up if, like the CD's, they are to make this series a success.

This disc is only worth buying if you're a fan of some of the artists and you want the full length video without any MTV interruptions.