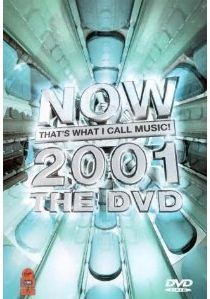 Its been a long time coming, but finally a DVD that offers music videos from various artists on one DVD. Whilst there are other music video DVD's available they only tend to be available via subscription, like the White Book, or are only available to companies for commercial use. Although there is an ever increasing number of music titles on DVD they only tend to be live concerts and not complete video collections, although Madonna has released her collection of videos on two discs. However, the popular 'Now That's What I Call Music' music collection has finally released a DVD containing a collection of popular titles from over the year. As well as the promotional videos there are also a number of behind the scenes sections and picture galleries.

With music videos being a multi-million pound industry, with some artists spending enough money to create a Hollywood blockbuster, you'll be expecting only the best. Fortunately, all the videos here are of the highest quality and the DVD technology allows you to see all the curves of Britney Spears, Gerri Halliwell, Fragma, and Victoria Beckham in all their digital glory. The colours are rich and vibrant with no signs of artifacting, even in the much 'cheaper' productions, and all have an above average bit-rate and the Robbie Williams track is presented in widescreen.

The sound is only presented in pro-logic, but never-the-less it is still perfect for the subject matter and the CD quality music is a huge bonus to the video. There's the occasional use of the rear channels, however I expect that this is just something that the decoder has decided to place there (although the 'Steps' video seemed more active than most)

The menu system is pleasantly animated and nicely presented. It's nothing special but it much better than most music, and films for that matter, titles that can only manage a static and boring menu system. If you can call them such, the extras are the behind the scenes footage for the video shoots and, or, live concerts. There's even a competition to win a framed platinum CD - well worth making the effort to enter. However, the only minus point is the lack of subtitles. Ok, so it may not be high on most peoples list but how about a karaoke facility?

The videos can also be individually selected or played back to back. If you decide to be selective about your video selections then you can view some information on the artist and the video as well as being informed of their website.

The various companies behind the 'Now' series must be truly congratulated for this release. They were amongst the first to start releasing the 'Now' collection on CD, although it was initially a single disc, followed by music videos and then Mini Disc. They weren't shy to embrace new technology and after 50 volumes the brand is still going strong.

At a running time of just over an hour I'm sure many more videos could have been added to the collection. However, you have to start somewhere and indeed they have made a great start. Let's just hope that each new music release will be accompanied by a DVD release with plenty of videos. If you are a music fan then this disc really is a must purchase.

All we need now is Britney to release a DVD of all of her videos so far (I wonder which ones us males are interested in most!?). If she does, I'm sure it will be a best seller the world over. How about it Britney? Extras