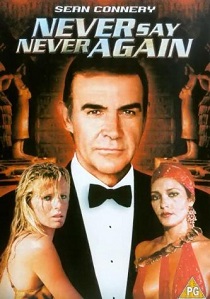 When Bond is "killed" in a training exercise he is sent to a health farm to recuperate and purge his body of all of the toxins acquired during his hectic days as a secret agent. However, his rest is soon disturbed by some strange goings on by an American airman and his dominating nurse.

When an American airbase is infiltrated by SPECTRE, and two test missiles armed with nuclear war heads, the world is held to ransom unless the countries of the world pay SPECTRE billions of dollars. Bond is soon hot on the trail of multi-millionaire Largo whose organisation is a handy cover for hiding and moving their deadly cargo.

The picture is pretty dire and although it has an above average bit-rate it suffers from picture imperfections and grain. However, there doesn't appear to be any signs of artifacting or outlining but little effort has gone into cleaning up the picture resulting in only a reasonable amount of colour detail.

The sound is only in standard surround so it is functional rather than exciting, although once the action kicks in during the missile test run and the final showdown between Bond and Largo is manages to produce something to keep your ears interested whilst you brain struggles to digest the dire plot.

Bond fans have been lead into a false sense of security when it comes to the Bond extras provided on the "official" films as this disc only has the bare minimum in the form of the Theatrical trailer. However, on the plus side the animated and scored menu is rather effective.

There can be no doubt that Connery was the best Bond, however, this remake of Thunderball is just awful and I can only assume that the temptation of the dollar made Connery head for the film studio. From the moment the dire credits start, looking like some horrendous Dallas rip-off, you know you're in for a bad ride and it gets progressively worse, although Connery's dry wit humour just about keeps it going.

The fact that he is an ageing fossil made this film more of a joke. For all of the acrobatic stunts that nobody of his age could ever manage to the beautiful girls young enough to be his daughter eyeing him up really made a farce of the Bond genre. I can't even bring myself to watch the original version of Casino Royale, let alone review it. A film for fans only then.