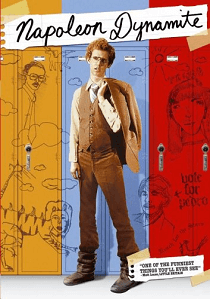 Napoleon Dynamite isn't like anyone else in his hometown of Preston, Idaho. In fact he is not like anyone you've ever known. A peculiar looking boy with an afro looking perm you'd rather die than have sat on your head and a pair of moon boots which are never off his feet, he lives with his quad-bike riding grandmother and 31 year-old chat room obsessed brother Kip. This oddball family is all too caught-up in their own lives to give Napoleon the time of day and he is left to his own devices as he bitterly makes his way through his tedious life.

When new boy Pedro, a Mexican with a surprisingly advanced moustache and rather splendid mountain bike, arrives at school, Napoleon takes it upon himself to show him around and ultimately strikes up an unlikely friendship. The number of Napoleon's friends doubles overnight when Deb, a rather shy teenage girl with an equally bizarre hair style, arrives at his house selling items to help fund her college education. But embarrassed by Napoleon's lack of enthusiasm for her key rings and hair care products she flees and leaves her wares on the porch. With another shrug of the shoulders Napoleon takes her things to school the following day and another friend, and possible date for the dance, is made.

So when Pedro decides to stand for the student-body president against the ever popular Summer, Napoleon realises that he's going to have to call on all of his limited talents to help him succeed. Trouble is, when his grandmother is injured in a quad-bike accident his annoying Uncle Rico turns up to help look after them. This may not sound too bad, but when Uncle Rico ropes Kip into his latest money making scam of flogging useless kitchen products door to door, as well as handing out leaflets about breast enhancing herbal remedies to all the girls at his school, Napoleon's life becomes even more troublesome than it was before. Oh, and did I mention that Kip's Internet chat room girlfriend LaFawnduh is also paying a visit?

Given the relatively small budget for the film the picture is quite remarkable. Still, with the rather plain and bleak Idaho landscapes there's actually not too much work for the DVD encoding process in the first place. Never the less, the picture is rich in colour and detail with good black levels throughout. The overly bright outdoor colours are also rich and vibrant and have a sharpness which belittles its low budget roots. It would be fair to say that the picture is stunning and it's made even better by a transfer which is free from dust specks or other forms of picture imperfections.

The 448 Kbps Dolby Digital soundtrack has very little to do. Given it's a heavily dialogue based film there is very little use of the surround channels whilst everything is concentrated in the front and centre channels. The dialogue is crisp and clear in the centre channel whilst there's some good stereo separation and steerage in the front channels. There is the occasional use of the surround channels, usually when there's music in the scene, but other than that it's a remarkably uninspiring soundtrack. Still, there's nothing wrong with that in this film.

The menu is a rather disappointing static and silent affair but given that there's twenty four different language options available, plus four commentary subtitle tracks, it's hardly surprising that the menu design and the quantity of extras has been somewhat curtailed to accommodate everything. Still, when you consider that the region one edition contains a short film, stills gallery and trailers you have to start feeling a little short changed and wonder why so many subtitle tracks are necessary.

The main extra on the disc is the Audio Commentary with Director/Co-Writer Jared Hess, Producer/Editor Jeremy Coon and Actor Jon Heder. It's not the best audio commentary you'll come across, but they all get along and it's interesting enough. Still, there's plenty of interesting snippets of information, such as that quite a lot of the scenes in the film were motivated by real life experiences of both Jared Hess and Jon Heder, whilst the group point out their many friends loitering around in the backgrounds as extras (the end credits go on for ages listing them too!).

Next up is the four minute The Wedding of The Century featurette. Until I left the DVD playing through the end credits I actually thought that this was some sort of sequel, but this featurette goes behind the scenes of a cast reunion as they film an additional scene which appears in the closing credits. The majority of the cast members are interviewed along with a number of clips from the film and even though it's rather short it's still worth a look in. So remember to watch the whole film until the bitter end for an interesting wedding and a dramatic horseback arrival from Napoleon.

Things are rounded off with four sets of low quality Deleted and Extended Scenes with an optional audio commentary. The deleted 2nd Locker Room, Pedro's holy chip flashback, Extended thrift store and la tienda lotto ticket and Kickball with Pedro and Napoleon montage scenes are rather amusing and in my opinion would have been better left in the film. The commentary doesn't really offer a good enough reason as why they were removed and it even goes as far as glossing over the fact they were deleted. Still, it's good to see them saved from the dustbin and on the DVD.

For Matt Lucas of Little Britain fame to be plastered across the cover spouting that it's "One of the funniest things you'll ever see" you have to realise that this is no ordinary comedy. This is no American Pie or Porky's, but something completely different, and it may not be everyone's cup of tea. It's very hard to pigeon hole this film, and I'm still struggling as I write this review, as it's neither laugh out funny nor anything surreal - even if it is a little odd, and with no discernable plot either. Still, I can see why Matt Lucas found it so appealing, even if it is a far throw from anything that Little Britain produced.

Shondrella Avery, who plays LaFawnduh in the film, sums up Napoleon Dynamite very well and she hits the spot by describing a film which has found its appeal by containing no profanity or sex. It's all inoffensive stuff and not the sort of thing you associate with teenage films. When a film which cost $400,000 to make is turned into a film which took over $50,000,000 at the box office you have to wonder whether she is right and if there's a little bit of a geek in everyone of us.

It's possibly not a film you'll want to dash out and buy, and true fans may want to opt for region one edition for the additional extras, but it's certainly worth a rental just to see what all of the fuss was about.