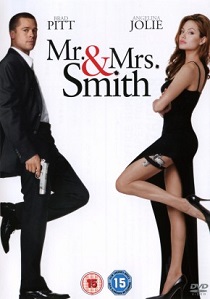 When John and Jane first met in Columbia it's was amid violent chaos, with both people ever so slightly puzzled as to just how both people could get in such a sticky situation. Never the less, it's love at first sight and they begin a sizzling affair, marrying a mere six weeks later. Several years down the line, John and Jane are just the usual suburban couple with an ordinary, lifeless suburban marriage that tends to involve daily arguments about the carpeting or curtains over dinner. With the spark gone from their relationship, they decide to sign up to some marriage counselling.

However, each of them has being keeping an extremely big secret from the other - they are both legendary assassins working for competing organisations. John's agency is a low-rent affair which is run with pal Eddie, while Jane's is fashionably chic and run exclusively by women from the top floor of the Chrysler building in New York. John keeps his guns hidden in a secret room in the tool shed, whilst Jane keeps her supply of razor-sharp knives locked in a cache in the oven. On a typical day they both set off separately to apparently do their normal jobs. However, today, John is to kill several men in the back room of a bar, whilst Jane is set to pose as a sexy dominatrix in order to get past her targets heavily armed guards.

With their skills in big demand, it was only a matter of time until the couple were unknowingly assigned to the same case by their competing agencies. When they identify each other and, compliant with the rules in their profession, their next assignment becomes a mission to kill each other. And just to make sure that they don't waiver in their mission, a few friends are lurking in the background to help them along the way. But will this bullet-strewn face-off be the tonic to save their marriage, assuming the pair manage to survive the melee of explosions and bullets?

The picture is bright and colourful with a high level of detail throughout. The black levels are impressive, with some solid and deep detail when it was needed, whilst any problems with grain and artifacting are kept to a minimum. Given that the majority of the action sequences take place at night or in dimly lit locations, the picture transfer is made all the better for it, otherwise it could have all been a bit of a mess. And with the film being such a recent release the transfer is clean with no signs of dust scratches or other forms of print damage.

As action films always cry out for thumping soundtracks, it's good to find that Twentieth Century Fox have supplied the film with 448 Kbps Dolby Digital and 768 Kbps DTS 5.1 soundtracks. And both tracks provide the action where it counts, with some clear and precise dialogue in the centre channel and some good use of the surround channels. Directional effects are also handled well in the front channels whilst bass lovers will discover some room shaking effects in the LFE channel. Naturally, the quality of the DTS soundtrack is the better of the two, and with its superior presence the dialogue and surround effects give it the edge of the Dolby rival.

Although the menu is a static picture of the front of the Smith's house, it is still scored with some nice transition effects between what few additional menus there are. Extras wise, things are a little disappointing and Twentieth Century Fox have definitely been a bit miserly with this release. It's not the sort of thing you'd expect for such a high profile release such as this. And without the addition of two audio commentaries, the few extras which are on offer would only add up to a mere token effort.

The main extras on the disc are the Audio commentaries with The Bourne Identity director Doug Liman and screenwriter Simon Kinberg, plus a second commentary from producers Lucas Foster and Akiva Goldsman. The commentary with Doug Liman and Simon Kinberg is certainly the better of the two with plenty of chatty detail on the uppity stars, especially the notorious Angelina Jolie, Vince Vaughn's incessant adlibbing and his incapability of sticking to the script, and the fact that there were a surprisingly large number of budget restraints. So much for big budget action films. The second track is reasonably interesting, but there are two many silent moments for my liking. Never the less, both tracks couldn't be any different from each other and it could be good idea to listen to one track whilst enabling the subtitle track on the other.

The eight minute Making a Scene featurette is the usual made for television PR fluff. The Fox Movie Channel special looks at the car chase scene after their true occupations were rumbled. The scene was suppose to be something more fancy, but those surprising budget restraints (perhaps the wage bill was a little too high) and an accident with some of the film stock, meant that the final scene wasn't quite as the writers had originally intended. Mind you, there's a nice outtake by Brad Pitt which actually ended up being used in the film. Next up are Three Deleted Scenes. Running for eight minutes in total, the three John and Eddie in the Kitchen, House Cleaning and HomeMade Store Shootout scenes can either be played in one go or selected individually from the menu. With no introduction, you're left to decide why the scenes were cut, but since the film runs just short of two hours they were probably cut for timing purposes. Mind you, they are high quality completed scenes, so if there is ever a director's cut, expect to see them restored to the film. Things are rounded off with the Teaser and Theatrical Trailers.

The film contains a few scenes that made me wince, especially when John was putting a hefty boot into the prone Jane on their lounge floor. Ok, so the action was hidden by an upturned sofa, but it still made me cringe at the thought of what was happening, even though the audio commentary with director Doug Liman and screenwriter Simon Kinberg said that the test audiences loved it. Mind you, it does result in a bigger headache for the BBFC. Do they cut or raise the certificate? Never the less, professional assassins or not, and you can call me old fashioned if you like, though it became a bizarre kind of mating ritual, the thought of a man beating up a woman like this made me squirm.

It's hardly surprising that Brad Pitt and Angelina Jolie are currently the most talked about screen couple in the world. The on screen chemistry between the pair is simply dazzlingly and, let's face it, the pair are not the ugliest people you're ever going to see, and one smouldering look from Angelina Jolie is enough to turn any man into a gibbering wreck. However, even with all the hype about their were they/weren't they relationship, the film is actually a big disappointment. In fact, along with The War of the Worlds, I would have to say that Mr. and Mrs. Smith is one of my biggest movie disappointments of 2005. Even the DVD package is a bit of a disappointment, with a set of frankly uninspiring extras. What ever happened to the famous Twentieth Century Fox double disc releases? Hang on a minute, I'm detecting a director's cut somewhere on the horizon.

Whilst all the hype behind Mr. and Mrs. Smith had the studio executives smiling from ear to ear with all the free publicity, it may have actually been its undoing. The principle cast members were simply too big for this film and it does suffer with both this and a fairly weak script. Mind you, I wouldn't bet against a sequel, nor this release selling by the lorry load.