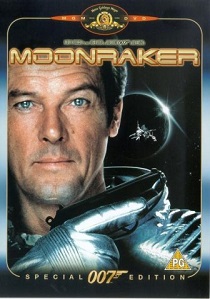 When a NASA Boeing 747 carrying a US space shuttle on loan to the UK crashes in mysterious circumstances, the British investigators cannot find any trace of the shuttle in the wreckage. James Bond is sent to the shuttle manufacturers, Drax Industries, in America to investigate.

Whilst Bond is visiting Drax's estate, a French chateau exported from France brick by brick, several attempts are made on his life and, naturally, he soon becomes suspicious of Drax. During his investigations at the manufacturing plant Bond meets Dr. Holly Goodhead, a NASA scientist who is on loan to Drax industries. However, there is more to Holly than meets the eye as she soon turns out to be a CIA agent also investigating Drax.

As the pair keep bumping into each other in various locations around the world they decide to work together. They soon uncover an evil plot to kill the world's population in order to allow Drax to repopulate the planet in his image with his group of super humans. There is only one thing for it, Bond must venture into space and stop Drax before he can unleash his deadly toxins on the planet.

The picture is bright and colourful with no artifacting or outlining and with an above average bit-rate throughout the film. As each Bond film is released there is a marked improvement in the picture quality. Where as the previous outings had virtually continuous picture imperfections on Moonraker they are far and few between. The space scenes are impressively dark whilst the scenes in Rio are wonderfully rich and colourful, although the picture could be a little washed out a times.

Although the soundtrack is presented in Dolby Digital, the rear channels are not really used to their full potential. I can only think of three short occasions during the film when they were used effectively, whilst the rest of the time the rear channels were only used by the musical score. However, I did tend to feel that the centre channel was a little messy with the dialogue occasionally sounding muffed. Ok, so the soundtrack has been re-mastered but they hardly spent an age doing it.

Yet again MGM have come up trumps with the extras. Although the stills gallery and trailers are starting to resemble filler material, the documentaries are definitely the most interesting to date and really make this disc shine. Although some of the special effects are laughable, to the degree of being in the class of Thunderbirds, I've still awarded the film a recommendation for the special effects. Why? Well, whilst some of the effects look absurd, some are pretty amazing. By watching the making of documentary you can see how they carried out several of the amazing effects by using simple techniques.

Although Moonraker was not suppose to follow The Spy Who Loved Me, the Star Wars phenomenon of the time guaranteed that Moonraker would be filmed next. The clever script and use of the Space Shuttle technology, and not forgetting the return of everyone's favourite henchman, ensured that Bond number 11 would smash the box office records. One thing still puzzles me. Why on earth would the Americans loan the British a space shuttle? What the hell would we do with it?