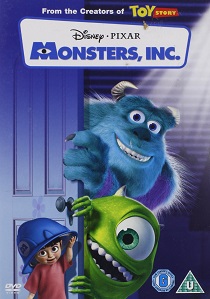 ReviewAnimationComedyFantasyBilly CrystalJohn Goodman
Review Article Go back to homepage
Are you afraid of the monsters in the closet. Well you should be as scaring is a big business for Monsters Inc and the people of Monstropolis.
John Goodman, Billy Crystal, Mary Gibbs, Steve Buscemi, James Coburn, Jennifer Tilly, Bob Peterson, John Ratzenberger, Frank Oz
Fantasy, Animation, Comedy
2
1 Hour 28 Minutes
Thank you for supporting DVD365.net when you order using the link(s) below.
Buy DVD
Story

Monsters Inc. is a power generation company in Monstropolis. Unlike most places where power is generated by nasty polluting power stations, Monstropolis depends on the screams of children to provide all of their clean energy needs. Does your child complain of strange things under the bed or things hiding in the cupboard? Well, they're probably right as a specially chosen monster, or scarer, has been matched with each child in the world to collect their nightly screams (but not change their sodden bedding). One such scarer is James P. Sullivan, or Sulley to his friends, and his assistant Mike Wazowski who together form the best scaring team on the Monsters Inc. scaring floor.

With Monstropolis suffering from an energy crisis the various scaring teams are hard at work trying to collect ever more quotas of screams and out do each others totals. When Sulley returns to work one evening he finds that one of the doorways to a child's bedroom has been left in place. Upon entering the room he finds nothing unusual and returns back to the factory floor. However, Sulley is in for the shock of his life when he discovers that one little girl has accidentally followed him back to Monstropolis, where children are feared to be highly toxic and the city is patrolled 24 hours a day by the CDA (Child Detection Agency). Sulley and Mike are going to have one heck of a problem getting her back to her bedroom without the company finding out.

For a film conceived and delivered entirely in the digital domain the picture reproduction should be absolutely flawless. And there is certainly no question of doubt with some utterly jaw dropping computer animation which only a few years ago would have been completely impossible. You only have to look at the hair on Sulley. Its movements alone must have taken the majority of the computers processing power needed to render each frame.

The colour definitions are truly remarkable and even the smallest amount of detail is replicated in amazing detail. You could almost believe you were viewing a real city landscape. Whilst Final Fantasy attempted to reproduce human movements and facial expressions it failed to really convince. However, in the young child character "Boo", I think Pixar have finally hit the mark, even if DreamWorks did run it close in Shrek with their shapely Princess Fiona.

Although not actively advertised on the outer packaging, Monsters Inc comes with both a Dolby Digital EX and DTS soundtrack. The outer paper casing advertises the fact it has a 5.1 soundtrack whilst the inlay booklet advertises its actually a THX certified EX soundtrack. The DTS logo is actually only indicated on the disc so there must have been some confusion on the production line somewhere, especially since the booklet also claims the collector's set is in both full and widescreen.

With this lack of consistency, and since I haven't yet got an EX set-up, I cannot confirm or deny that it is indeed an EX soundtrack. However, it most definitely contains a DTS soundtrack and its THX certified as you get the wonderful THX cow fanfare to dust off your speakers. I just hope that this is not another cock-up by the distribution companies, or that the region one edition is going to have a load of additional features.

Either soundtrack provides some enthralling and exciting entertainment that really enhances the enjoyment of the film. There's some excellent use of the surround channels with so many subtle and ambient sound effects that I lost count. The stereo steerage and dialogue is just perfect in the centre channels are there is never a moment when the volume needed adjusting. The only slight disappointment, and it is only slight, would be in the lower frequency effects. However, with this being a family film we don't want to go giving all the little kiddies more nightmares than they really need. It's really hard to pick one soundtrack above the other, but unless its a real stinker I'll always pick the DTS.

The disc set is packaged in that most hateful of DVD packaging - paper. The discs are enclosed in a gatefold sleeve that also houses a relatively sparse booklet. At least it does contain a navigation map for all of those extras. There's certainly nothing wrong with the overall artwork of the set but I do detest paper boxes as they can soon start to deteriorate at the edges once the nicks and scratches occur.

For a company dedicated to computer animation it would be impossible to suggest that the menus would be plain and boring. Fortunately, they are not with each menu containing an animated and scored introduction. It's even worth being a little patient and seeing what animated antics will occur on the menu, especially when the CDA is around.

Owners of the collector's edition of the film are in for a scary amount of extras. Just looking at the vast number of extras listed below is enough to give you nightmares. There's a huge selection of featurettes, albeit rather short ones, which explain the various concepts behind the film, the filmmakers themselves and even a brief mention of the cast members. However, they must have wanted too much money to make a repeat appearance as they only seem to appear in promotional footage, although Billy Crystal does provide the voice in Boo's door game.

If that wasn't enough there are two Pixar shorts including Mikes New Car, which was created exclusively for the video and DVD, and the academy award winning animated short film For the Birds. When it comes to producing award winning animation, Pixar certainly know their stuff. Whilst the extras are certainly bountiful there are a few occasions when they are doubled up. The outtakes and Pixar short films are available on the main menu of the second disc as well as certain subject related submenus. Some people may complain about this needless duplication, but it is a good idea to have those important main extras to hand.

Although the family edition is some five pounds cheaper than the collector's edition I can see little point in buying it. It you way up the amount of extras you get it is certainly worth it. You'd never buy a disc such as this exclusively for the children now would you? Once the kids have been put to bed you can spin up the extras disc and see just how they made the film.