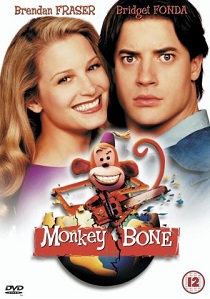 ReviewAnimationComedyFantasy
Review Article Go back to homepage
Whilst in a coma, an up and coming cartoonist finds himself trapped in his own nightmare together with his cartoon character, Monkeybone.
Brendan Fraser, Bridget Fonda, Chris Kattan, Giancarlo Esposito, Rose McGowan, Dave Foley, Whoopi Goldberg, Megan Mullally
Fantasy, Animation, Comedy
2
1 Hour 28 Minutes
Thank you for supporting DVD365.net when you order using the link(s) below.
Buy DVD
Story

When an unfortunate run in with a giant inflatable monkey results in a car crash, self-conscious cartoonist Stu Miley finds himself in a deep coma. Stu "awakes" to finds himself in a strange subconscious world called Downtown. It is a place between life and death which is inhabited by strange beings and other lost souls waiting for the signal to die or return to the world of the living. However, Stu is not going to be lonely in this world as his madcap cartoon creation Monkeybone is also there.

Desperate to escape Downtown, Stu discovers that the only way out is to steal a golden exit pass from Death herself. So together with his mad monkey sidekick he ventures into Deaths realm to steal a pass. But before Stu has chance to use his pass and return to his body, Monkeybone steals it and leaves him stranded in Downtown.

With Monkeybone now inhibiting Stu's body he can finally live as a human and is free to ruin Stu's life. And he's doing a good job of it too, with a complete new monkey persona that even his girlfriend has trouble in adapting to. There's only one thing for it, Stu must revisit Death and attempt to get another exit pass, but this time its not going to be that easy.

The picture can be rather disappointing at times with a somewhat washed out appearance and lack of real detail and depth. This is especially evident during some of the Downtown scenes when the picture can go from wonderfully clear one minute, with some excellent animation and detail, to washed out the next. However, the average bit-rate still manages to produce a picture free from artifacting or outlining. It's a shame really as it lets the entire package down somewhat.

The animation used for the Monkeybone character is rather impressive and at times it looked like full computer CGI. However, rest assured that all that the computer wizardry is kept to a minimum and good old fashioned stop motion animation is used throughout.

Although the disc contains both a Dolby Digital and DTS soundtrack there is nothing really exciting about it. Even in the weird and wonderful Downtown, with all of its strange inhabitants and goings on, there is a very little use of the surround channels. While the dialogue is clear enough in the front and centre channels there is no real winner with either sound format. However, the DTS soundtrack does have its usual edge in the clarity stakes.

The disc contains an interesting range of extras plus some cleverly animated and scored menus. There's a good director's commentary that provides plenty of insight into the strange goings on and from the director of A Nightmare Before Christmas you can be sure of plenty of those. There's also a half decent featurette on how Monkeybone's animation was created and a number of extended scenes which tend to drag on a bit too much.

The script is definitely a bizarre one but it's a funny one at that. This is especially so in the later half of the film when Stu has to take some drastic measures in order to stop Monkeybone from using his body. I can certainly see why it didn't do as well at the box office as they'd hoped, but if you like madcap surreal comedy then you've come to the right place.