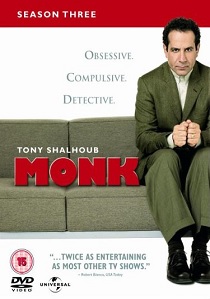 ReviewComedyDramaAdventure
Review Article Go back to homepage
Adrian Monk is a brilliant San Francisco detective, but after his wife is murdered he's taken off the force due to an obsessive compulsive disorder.
Tony Shalhoub, Bitty Schram, Ted Levine, Jason Gray-Stanford, Traylor Howard
Drama, Action/Adventure, Comedy
2
10 Hour 57 Minutes
Thank you for supporting DVD365.net when you order using the link(s) below.
Buy DVD
Story

Adrian Monk is a private investigator with a gift... and a curse. Serving on the San Francisco police force, Monk is a brilliant detective with a remarkable talent for solving crime with only the smallest amount of evidence. His amazing skill is known around the land. But after his wife was killed by car bomb he was unable to solve the murder and locked himself away in his house for years going over the case in minute detail, developing a particularly bad case of obsessive compulsive disorder in the process. Now on psychiatric leave from the police department, Monk is unable to survive in the world without his weekly visits to his psychiatrist.

However, his extensive array of phobias is not going to stop him getting back to work. So after hiring help in the form of nurse Sharona Fleming, Monk has started working as a freelance consultant on the departments trickiest of cases. And the mayor is more than happy to have him back, even though his services are costing the police department. Monk hopes that being back at work will convince his former boss, Captain Stottlemeyer, that he's well enough and able to return to the force. Trouble is, Stottlemeyer is a hard man to please and, although he certainly admires his amazing detective skills, he's also rather annoyed by Monk's strange eccentricities as well as being ever so slightly jealous by the fact he's is always so right.

Season three sees another sixteen episodes of Monk continuing to advise on the city's trickiest murder cases, starting with a trip to New York and a lead that may help solve his wife's murder case. He even manages to upset the commissioner and gets himself dismissed as a consultant, and revoking his license in the process too. Even Sharona has finally had enough of Monk and decides to move on. Funny, fresh and quirky, Monk is an award winning smash-hit that even manages to attract high calibre guest appearances from the likes of Carmen Electra, Judge Reinhold and James Brolin.

The picture transfer is what you'd typically expect for the television series to DVD - bright and colourful but with so much grain it becomes a bit of distraction. Whilst there's no problem with artifacting or outlining, it's your normal NTSC to PAL conversion with a strange raft of colours and flesh tones that don't really suit the bright exterior scenes of San Francisco. Unfortunately, it's a problem that so many American series on DVD suffer from, and it's not as if Monk isn't a popular export that begs for something much better. And if the transfer quality of the first two season is anything to go by, I won't be expecting anything special from the next one either.

The soundtrack is a rather standard Dolby Digital 2.0 Kbps affair which, given America's push for digital television and everything Dolby Digital 5.1, it's quite a surprise to find a soundtrack as flat and uninspiring as this. However, it's not as if a televisions series such as this calls for anything exciting in the surround stakes. Even so, Randy Newman's catchy tune It's A Jungle Out There would have sounded so much better in full blown 5.1. Still, you can't always get what you ask for and it more than meets its needs with clear and precise dialogue and a reasonably complementary musical score.

The main menu is scored with Randy Newman's series theme tune whilst a number of cut scenes play in the background. Extras wise, it's hard to describe them as unfortunately I was only sent one of the four discs in the season too review. However, even then it's not as if it's easy to find them because the five minute, and rather poor quality, Favourite Episode extra is bizarrely tucked away on the episode selection menu. In it, cast members Tony Shalhoub, Ted Levine, Jason Gray-Stanford and series creator Andy Breckman, talk about their favourite episodes from the show. It's not the most exciting of extras, but it's better than nothing.

There's doubt that Monk is the best detective series around. Yeap, it's even better than Frost and that equally impressive Colombo and his impossibly filthy anorak. In fact, you could probably argue that Monk is a cross between them both with plenty of comedy thrown in for good measure. But ask yourself one question. Why do you insist on continually watching this multi-award winning series? After all, it's simply a detective series with murder plots which are repeated week-in, week-out in other detective shows. No, the real reason why you watch is for the shear brilliance of Tony Shalhoub and the way that all the characters play off each other so well. You could even argue that the series was created for Shalhoub, after all, he is one of the executive producers, and that no other man could ever pick up the reins of Monk and get away with it.

The wonderful series of Monk continues unabated. Every week appears to bring up yet another of Monk's phobias out in the open and in-between laughing out loud (is that really acceptable during a police murder investigation?) you're left wondering just what phobias are possibly left for him to have. The only downside is that season three sees Sharona leave (and depending on where you read it, it was either down to contract problems over Bitty Schram's pay, or that she simply wanted to move on to new projects). Unfortunately, only receiving one of the four discs for review I'm unable to report on whether the transition between Sharona and her replacement nurse is a successful one.

Monk is a wonderful television series and deserves a place in your DVD collection. If you've never seen the series before then make sure you start at the beginning and season one. Fortunately, hunt around on the Internet and you'll find it going for a song. Highly recommended.