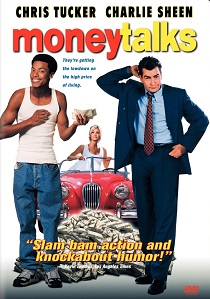 ReviewComedyAdventure
Review Article Go back to homepage
A jailbreak accidentally releases motor mouth ticket hustler Franklin Hatchet on the run for a murder he didn't commit. A whole cities worth of police are now on his tale and only down on his luck reporter James can help clear his name. Cue an action/comedy with which Chris Tucker truly thrives on.
Charlie Sheen, Chris Tucker, Gérard Ismaël, Frank Bruynbroek, Heather Locklear, Paul Sorvino, Veronica Cartwright
Action/Adventure, Comedy
1
1 Hour 35 Minutes
Thank you for supporting DVD365.net when you order using the link(s) below.
Buy DVD
Story

Franklin is a small time crook and ticket tout. His dealings soon get exposed by a go-getting reporter James Russell and he is ultimately arrested and ends up in jail. He is placed on a jail transport bus handcuffed to a mysterious Frenchman. Franklin pretends to be 'hard' to avoid being beaten up, or even worse, but his motor mouth ramblings get on his partners nerves.

A jailbreak has been organised by a gang of French commandos and once executed he is forced to flee with his handcuffed assailant to a waiting helicopter. Naturally, once on board this excess baggage is not required and he leaps from the helicopter. In his unexpected escape he has been singled out as a murderer and the only person who can help him clear his name is a certain reporter who is desperate for a big story.

To avoid detection by the police, Frankin must now adjust his live wire lifestyle, with many comical scenes, to fit in with James' and his well respected, and rich, fiancée Grace. As they attempt to find this mysterious Frenchman they uncover more than they had bargained for, discovering that they're dealing with a highly trained, and armed, gang of diamond thieves. However, Franklin's underworld contacts, both good, and bad, help save the day in an ultimate showdown in a stadium. Without spoiling the plot, his two friends armed with a missile launcher are just hilarious!

For a relatively early disc, the picture quality is excellent and the surround is certainly put to good use during the prison escape and the ultimate showdown (a gun fight always brings out the best in a system!) We are also treated to clips from some of Chris Tucker's other films, with one particular highlight worth the price of the disc alone.

This is a pre Rush Hour film for Chris Tucker and you can certainly witness his brand of comedy which shot him from Saturday Night Live to big time Hollywood star. As usual, Charlie Sheen seems to have another bit part role in which can only still be classed as a 'B' movie, is he forever to be tarred with his Hot Shots days? Still, that doesn't mean that he's no good here.

If you are a fan of Chris Tucker then this rather low key disc is a must.