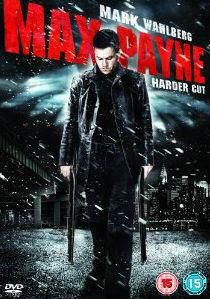 Deep in the bowels of a New York city Police Department, veteran Detective Max Payne has been working the Cold Case unit for the past three years. Never resting, and outcast from the rest of the police department, the trigger happy Max is determined to find, and dish out some suitably violent retribution for, the brutal murderer of his beloved wife Michelle and child. Although he managed to gun down two of the assailants in his home, the ring leader was able to escape. Hell bent on revenge, Max won't let anyone stand in his way and his methods are not the usual way of dealing with the crime on the streets on New York, but if it gets the job done then Max won't change his methods to please his supervisors.

Still looking for new leads on the case, Max crashes a party run by his snitch where he meets the scantily clad Natasha Sax and her sister, Mona. Promising some information on the case Natasha and Max head back to his apartment where she shows a desire for something other than helping Max on the case. Naturally upset, Max throws Natasha out of his apartment and into the cold but, whilst walking back to the club and talking to her drug dealer on the phone for her next fix, Natasha is attacked and killed. Unaware of her fate, the following morning Max is called by his former partner Alex who calls him down to the crime scene. Alex pulls him to one side and informs him that his wallet was found on the dead girl and he's now the prime suspect. When this information reaches Natasha's sister Mona, she heads out for some retribution of her own.

Back in the warmth of his office, Alex discovers that a tattoo of wings found on Natasha's arm are very similar to the ones found on the assailants killed at the original crime scene in Max's apartment. Alex tries to contact Max but keeps getting his voicemail. When Max finally receives the message he rushes over to Alex's apartment, only to find him dead. Before he has chance to call in the police Max is attacked and left for dead. Waking up in hospital he's convinced that Alex's investigation is the key and he heads over to his office to search through his partner's files. It is here that Max learns that a man named Owen Greene was the last person Natasha called before her death. It looks like that trail may have just picked up a scent worth perusing.

It doesn't take long for Mona to find Max and after managing to convince her that they are looking for the same person they do something that Max doesn't like - join forces. The trail eventually leads to Aesir Pharmaceuticals and a mysterious, and dangerous, drug called Valkyrie - a drug that was meant to turn original soldiers into super soldiers. Unfortunately, it all went horribly wrong and, worse of all, his wife was a former employee of the company. Was she murdered because of something she knew? There's only one way to find out - and it's going to involve lots of gun fire and explosions that only Max Payne knows how to deal with.

The film is suppose to be dark - with dark rooms and dingy alleyways. With falling snow and incessant rail fall in a decidedly gloomy looking New York, Max Payne looks fantastic on DVD (and even better on Blu-Ray - a format that was invented for a film such as this). Given the dark locations, the image quality is fantastic with some solid blacks and, when called for, an excellent range of colours in both the scenery, costumes and skin tones. The continuous snow and rain could cause pixelisation and outlining issues, but the DVD handles it all with ease and, given that it's a recent release with plenty of special effects, there are no issues with dust specks and other forms of print damage.

Along with the excellent picture transfer the 448 Kbps Dolby Digital 5.1 soundtrack is just as impressive. Unlike like plenty of other action films, Max Payne uses the rear channels to their maximum potential. There's explosions, breaking windows and gun fire galore as the soundtrack pulls you deep into the action. Unfortunately, Mark Wahlberg isn't the clearest speaker around and his voice can be lost in a big action film. However, the centre channel carries his voice extremely well and, together with some good stereo steerage in the front stereo channels plus some booming bass in the LFE channel, it manages to be what an action film should be - full of action and sound to go with it.

Once you get past the advert for Fox's Blu-Ray back catalogue titles you're greeted with a rather dull looking menu. Sure, it's scored, but a bit of animation wouldn't have gone amiss (especially since I'm sure some of the movies special effects could have been reused). Extras wise, there's a bit of confusion as to what extras are going to be provided on the European region two disc. First off, I was sent two differing copies for review - one with zero extras (apart from a trailer for Notorious) and another with a few additional extras on. There's also rumours flying around of an Audio Commentary, but I failed to find it on either of the supplied review discs. I'm assuming the disc with the extras will be version that will be eventually released, so that's the version being reviewed here.

The extras we do have can be found on the Special Features menu where a Featurette has been split into two parts - both running for around thirty minutes each and equipped with subtitles. The first featurette looks at the people behind the film (and in front of the camera) and concentrates on the actual production. The rather chubby director John Moore (who knows something about remakes - he directed The Omen and The Flight of the Phoenix) starts things off with plenty of swearing about creating DVD extras and goes on to provide plenty of gestures to the camera (which is not a particularly good way of promoting the film or bonding with the fans). Still, the value of the material is excellent - and well produced too.

Part two of the featurette spends more time concentrating on the film set. More interesting than the first, there's also plenty of interviews with pretty much every cast member going - including the likes of Mark Wahlberg, Mila Kunis, Chris O'Donnell, Mila Kunis and Olga Kurylenko. With the majority of behind-the-scenes featurettes like this looking like one long press junket, it's refreshing to find all of the stars being interviewed on set in between their shots. Sure, there's the usual waffle about their motivation for their character but once you get this out of the way it progresses to look at the other crew members - even the lesser members who tend to be ignored - who helped create the film. Whilst the disc is hardly bursting with extras (I'm still baffled why a film such as this has so few extras) these extras do prove some interest and insight into the production - even if they are accompanied by a rather annoying musical score.

After other video game to screen adaptations, such as Resident Evil, Doom and Hitman, I wasn't really expecting too much from Max Payne. It was an assumption that turned out to be pretty much spot on. The film opened at the box office with good audience figures (probably thanks to plenty of advertising and fans of the original game who rushed to see it on the big screen) and it ended up taking around $60 million dollars worldwide (not too bad when you consider its budget was an estimated $35 million dollars). Whilst the box office takings were a similar amount to previous video game adaptations (and unfortunately figures which may hint of a possible sequel) it still suffers from the same lack of direction. Weirdly, it also reveals just how brain dead the audience can be.

The critics didn't like it too either and, after seeing the film for the first time on DVD, I can see why as I sat for over an hour baffled at just what the heck was going on. I guess it helps to know the general plot of the original video game (which I haven't a clue - running around shooting people perhaps?) but it looked like they were making it up as they went along with a puzzling storyline, poorly chosen actors (apart from the excellently cast Mark Wahlberg - the bonkers roles really do suit him), awful and clichéd dialogue and a conclusion so obvious that they may as well have saved you some time and told you "who dunnit" during the opening credits. A sequel - and possible further video game spin off looked distinctly possible too.

Never the less, Max Payne does at least try and fans of the game, genre and/or graphic novels such as Sin City, will probably be more than happy to pick up the DVD. The special effects are certainly interesting - and a definite plus point for the retail market - whilst the rain and snow covered streets dark are mysterious and the deserted streets perhaps make a nod to the computer game and it's lack of active background detail. It's just a pity that those fans will be disappointed by the lack of extras on the DVD edition.

I always like to try and find a positive in a film and in the case of Max Payne it has to be that. Whilst it ultimately failed to grab the desired theatrical audience, its true home is on DVD. With the many dark - almost film noir - scenes, special effects (the good old bullet-time scene is present and correct) and the better collection of extras on the Blu-Ray, it's probably worth your while splashing out a few extra quid for the high-definition version (assuming you're a Blu-Ray owner that is!). I'm just hoping we're spared the fate of a sequel.

BD
Sam Mendes, the Oscar®-winning director of Skyfall, Spectre and American Beauty, brings his singular vision to his World War I epic, 1917 to DVD, Blu-ray and 4K Blu-ray 18th May 2020 from ... END_OF_DOCUMENT_TOKEN_TO_BE_REPLACED
Latest ReviewsView